It's been very wet and windy recently and I've not been able to get out into the garden. It was half term week and I have taken some time off to be with the family. When I did get into the garden I finished off some of the planting out. The rain though has helped the veggies along nicely as the soil was drying out rather badly. The overwintering onions in particular have swelled even more, they look good enough to pull. 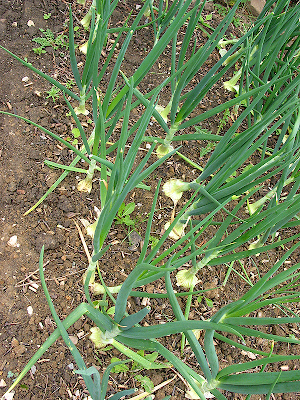 The spring greens were dug up finally, they had turned a little tough so they were consigned to the compost heap. Again, brassicas are not a favourite for family eating, so I won't bother next year, perhaps I will try some purple sprouting brocolli as it is always good use of ground to grow something overwinter.

In place of the spring greens, the remainder of the sweetcorn was planted out. One plant of the first plantings had withered a bit so I replaced it. 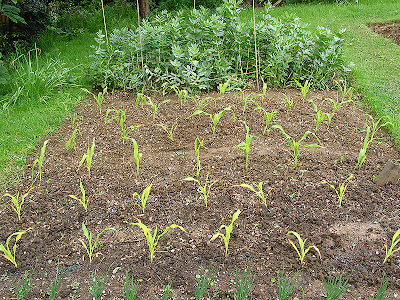 The overwintered broad beans were supported with string between bamboo sticks, as they had started to fall over with the high winds (behind sweetcorn in picture above).

The spinach had all bolted, so this was pulled and beetroot planted in its stead. The beetroot wasn't doing too well in the greenhouse modules, not sure why. I also noticed that the garlic has a bad case of rust which is a fungal disease (see picture below). Reading around it seems not much can be done and it isn't too bad; I may get smaller bulbs but the garlic is still edible. 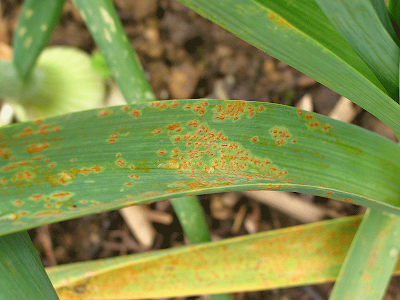 In the greenhouse, the toms have been planted into their final pots and are showing their first flowers; strings have been attached for them to be supported by and the drip watering system set up. The pots have been sat in trays to catch any water that drains through. 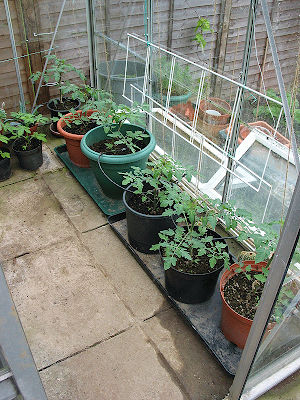 I'm a little concerned about the asparagus, it is falling over (probably the wind) and they don't look like the ferns will grow very well laying flat, so I have staked them.

The early potatoes in buckets look great and flower buds are forming, anyone know when would be the best time to harvest them? 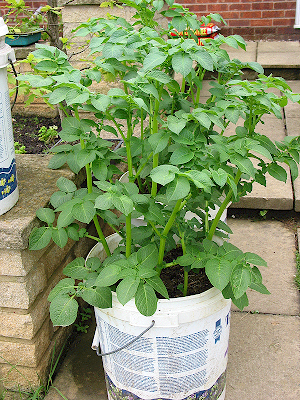 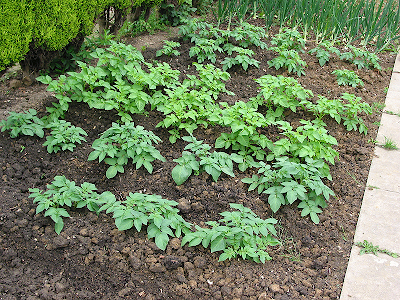 It was not quite so warm this weekend and now I'm worried that there will be a late frost because I planted out tomatoes, runner beans, courgettes and more sweetcorn, all of which don't take kindly to freezing temperatures. The courgettes are protected by plastic domes which are really squirrel protectors for bird feeders.

The protectors didn't really work as the squirrels managed to climb up from underneath the domes, but they do make great mini-cloches. The runner beans are behind the domes, I place 2 plants per pole. 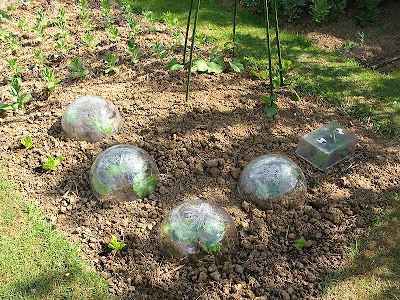 Tomatoes outside. They'll be grown as cordons hence the bamboo canes. Notice how the soil has dried up and formed big hard lumps. Underneath though it was still quite moist. In front of the toms are a short row of radish and then a full row of turnips and then some more radish. 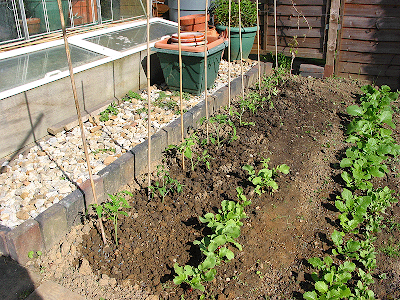 Having bought some multi-purpose compost at the weekend I mixed it 50:50 with the loam made from turf and used it to plant up the tomatoes into large buckets in the greenhouse. You can also see how well the early potatoes are growing in the buckets. 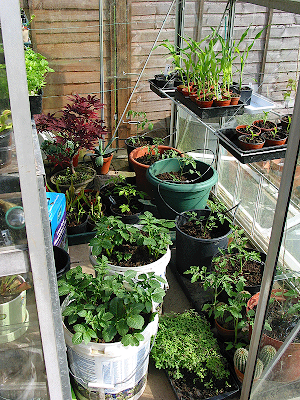 A new lot of dwarf beans and some more lettuce were sown into modules along with butternut squash seeds in a 5" pot all in the greenhouse. The peppers, chillis and aubergines were potted on into individual 3" pots.

To make room, the snapdragons trays (coming on nicely) were put out in the cold frame. 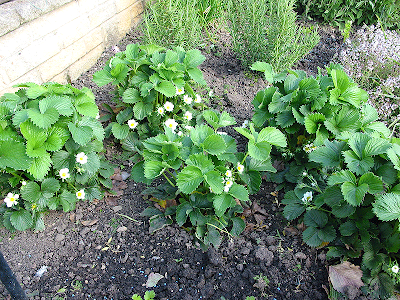 I've pretty much filled the beds now, there will be just enough room for the beetroot and parsnips but I'm not really sure where the leeks will go. The only spot is where the spinach, garlic and overwintering onions are. The spinach is bolting so that can be pulled up soon and the garlic/onions I hope may be harvested before the leeks can be sown. It's not ideal to put in leeks after onions but I may not have a choice.

Not long for harvest? 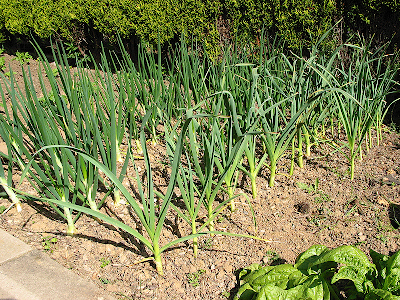 The squash will have to be planted in the only corner left behind a pampass grass, one of the concessions to retaining some non-edible plants in the garden. But maybe even its days are numbered? Oh and I just remembered the dwarf beans, where will they go? I feel a liitle bit more turf will have to be removed, I only need enough for 2 or 3 more rows.

I'm still experimenting with how much to plant in the beds; it depends on how much gets eaten by the family. I'd rather grow a lot of what we like. I may have overdone it with the potatoes as these have used a lot more ground than I had anticipated. But they are coming on nicely and also help loosen the soil up. 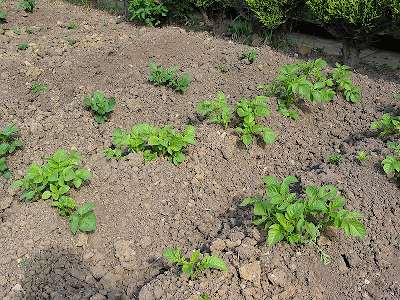 I always planned to grow a lot of sweetcorn as this was very popular last year and plenty of onions/garlic (we haven't bought onions or garlic for a year now). But maybe I have grown too many broad beans.

Some more radish and spring greens were eaten last weekend. The next veg I suspect will be the broad beans. There are still some in the freezer from last year, not a popular veg for the kids but my wife and I have them with cous cous from a Madur Jafrey recipe. I must search out some other meals from Recipezaar, a very useful website to find interesting ways to cook your fresh veggies.
Posted by Unknown at 21:02 No comments:

What a lovely weekend we just had. The potatoes were earthed up but it accentuated how quickly clay soil can dry out in to big lumps. This is the old flower bed too where the soil looks to have had some improvement, not enough though.

The warmth is making the bases swell on the overwintering onions and even the spring planted onion sets have put on good growth. 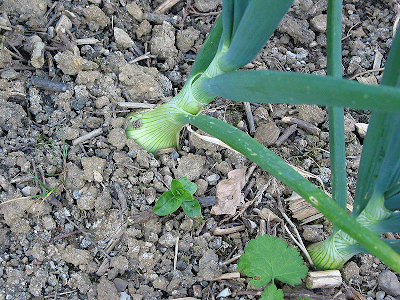 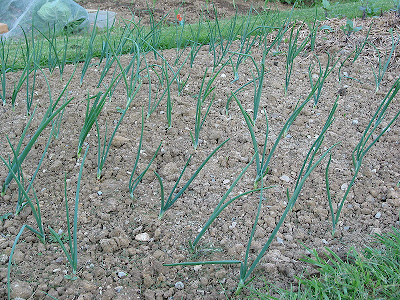 The sweetcorn was planted out as they had reached a good size in their pots in the greenhouse. It's risky as there may still be a late frost, so half have been kept back. The overwintered broad beans in the background have come on well too and are over 2 feet tall. 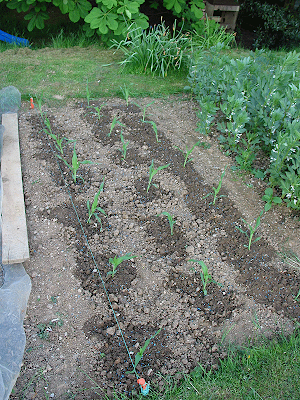 In the greenhouse, the tomato plants will need planting into their final pots soon, but the greenhouse needs emptying to provide the space and that was partly why the sweetcorn were planted out (without hardening off, oops). 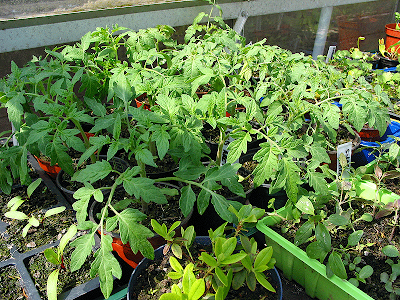 Once the greenhouse is emptied of seedlings, the automatic watering system will be set up for the tomatoes, peppers, melons, cucumber (no germination so far though) and aubergines and it is also connected to the outside for the bonsai trees. The trees look marvellous with their new green shoots (must take some photos) but are vulnerable to drying out in hot weather since they are in very shallow trays with little soil.

The early potatoes in buckets showed their green tips and were duly covered with fresh soil. Next day they had poked through again! 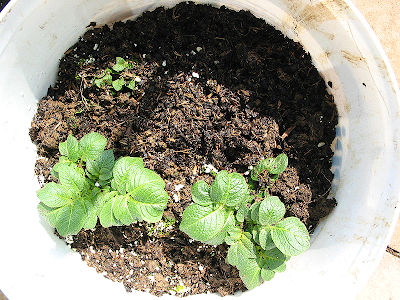 There is quite a bit of pricking out to do such as the peppers, aubergines, chillies and parsley but I need to buy more compost for this, so that will have to wait.

The turnips and radish were thinned out and some of the radish were eaten with a salad (delicious). Four sticks of rhubarb were pulled and stewed for dessert with ice cream.

Setbacks have been a singular lack of germination of the dwarf beans. They usually germinate readily, maybe I was too early, anyway another batch will be sown (when I get that compost). The cucumbers didn't germinate either despite being indoors on a windowsill. That's annoying given the price of the seed. Maybe I can buy a seedling or two when I get that compost. Or, I could wait for the plant swap next week at work. I have a lot of snapdragons and parsley for that.

Finally, a splash of colour; this azalea is spectacular. It was rescued from the garden and placed in its own pot of ericaceous compost. It's a pity the flowers don't last long. 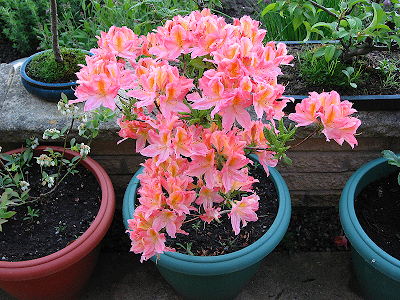 As I write this, the weather has turned colder but frost is not forecast. Keep a weather eye.
Posted by Unknown at 23:43 1 comment:

I planted out my broad beans this weekend after I'd moved them from the greenhouse into the cold frame. I'm not very patient at hardening off so they only had 2 nights, anyway broad beans are very hardy and it's warming up nicely. The plants looked pristine in their pots, they won't stay like that unfortunately. The blackfly is the main enemy; they prefer the growing tips so the cure is to pinch them out at the first sign, this encourages pod growth anyway. Bean weevils are the other pest, these take little semi-cricles out of the leaf edges but the plant seems to do alright. 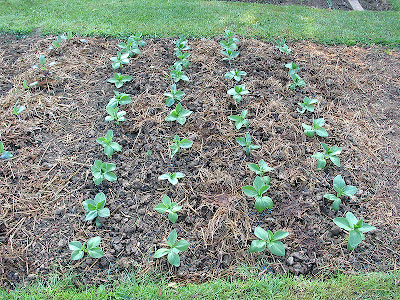 I also planted out the kohl rabi. 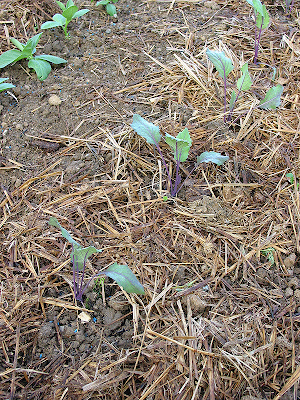 I need to put some netting on these to keep the pigeons off. I mulched with the straw from the farmyard manure I'd collected in January. The clay soil is already drying out and turning into hard clumps despite a generous layering of compost through the winter.

One variety of the potatoes are showing at last, this is the Lady Balfour which is an early maincrop. Some of the asparagus is emerging too, but not all of it, I'm worried some of the crowns won't emerge but this current warm weather should help.

The courgettes are growing well in the greenhouse and were potted up into individual pots. 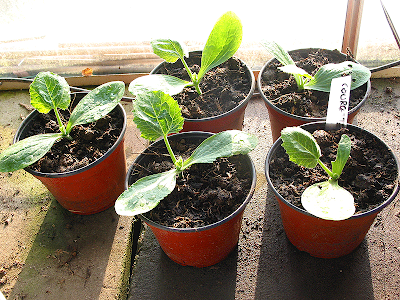 Finally, the peas were planted in one row of about 15 plants closely spaced to support each other.

One setback though are the melon seedlings which are now just one. Something ate them and I suspect a snail or slug.
Posted by Unknown at 21:34 1 comment: