Amongst the failures have been some surprising successes such as the blackberries and apples which of course go very well together. So I've been making deep pies with them.  I should also make some jam.

The beetroot are very big this year and I have been pickling them and making soups but I also like to make curry dishes with them.  The problem is that I am the only one in the family that eats them, oh well all the more for me.

The apples are good enough to eat raw as well as for cooking. 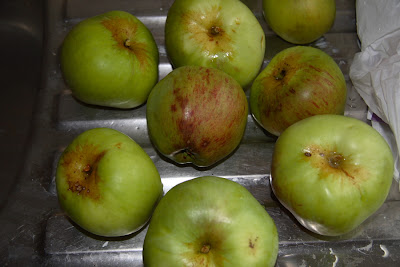 I've started the autumn digging which is possibly a first.  Usually the digging doesn't happen until I need to plant in spring, but I want to empty the large compost bin to make room for this season's garden waste.  I left the compost bin untouched for most of the summer so I wasn't sure what I'd find when I pulled back the covering.  I'm pleased to say it's turned into some lovely dark humus which I'm adding to the dug areas. This should turn into some lovely friable soil next spring. 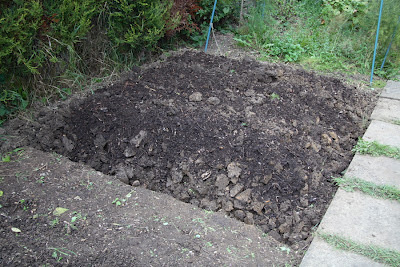 I dug up some strawberries and planted new ones that had grown from runners.  The old plants have distorted leaves and fruit (is that a virus?) so I replaced them.  I contemplated replanting the whole bed elsewhere as perhaps I should not be growing them in the same place for so long.  I'll give it another year. 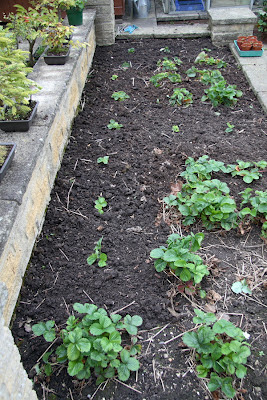 There's a good haul of peppers in the greenhouse which are starting to turn red. 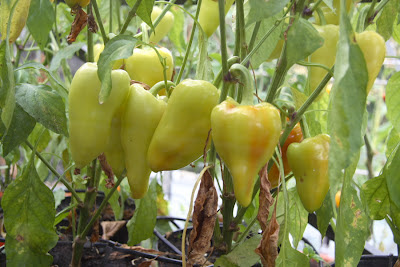 Well I spoke too soon.  I have  been on holiday which is always a risky thing to do when the veg are all coming into harvest.  First disaster was the aubergines which have all suffered from a very hot day it seems and dried out.  I came back to find some very sorry looking plants.  The maximum temperature had been 42C at one point.  I thought I would be OK as I had set up the automatic watering system, but I should have done that earlier to test whether it would be sufficient, clearly not.  The tomato and cucumber plants had similarly suffered although the peppers seem to be OK. 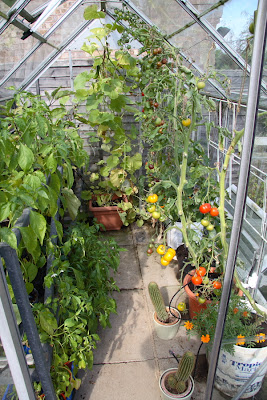 However, I was able to harvest some medium sized aubergines and made a nice moussaka and a ratatouille with them.  The tomatoes have been made into passata and of course used  for the aubergine meals.  There are plenty of cucumbers in the garden so it's not a complete loss.  One bonus is that I have a nice melon of a good size forming; can't wait for that.

One of my first jobs after the holiday was to harvest the spuds which I had left in the ground after the blight hit.  I wasn't expecting much as the tubers that I had harvested were split and not too big.  However, the yield is rather good after all.  I laid them out on a table to dry on a nice sunny and hot Sunday. 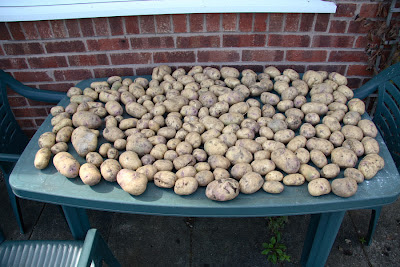 It was hard work made all the harder because each dig with the fork consisted of a huge and heavy lump of soil. Of course, as I forked the lumps to break them up then I stabbed a spud. So frustrating.  I haven't broken the lumps up but will leave that to the weather and if I have enough compost I'll mulch. 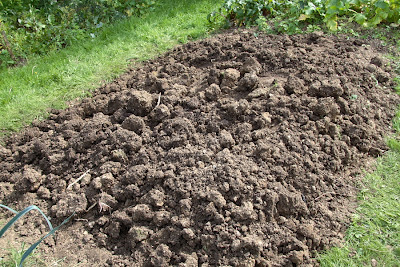 Second disaster is that the runner beans have gone past their best, I tried some for a meal and they are stringy.  I'm going to grow less next year since they are not a family favourite and will grow climbing French beans instead which have been delicious. There are plenty of them but they should have been picked mid holiday (about 2 weeks ago). 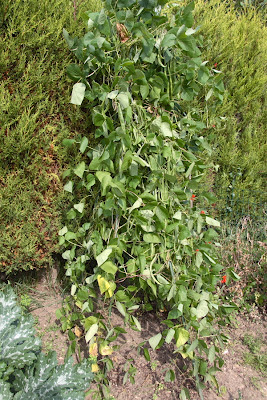 Third disaster, the weeds have thrived. The bottom bed which ironically is not so good at providing good veg being partly under a tree, is choked with them. 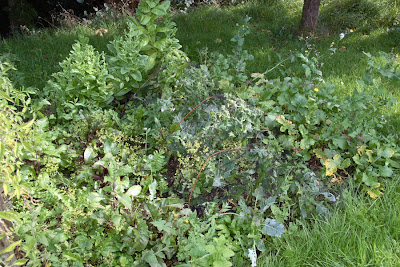 And the outdoor tomatoes have been poor, some of them got blight and the fruit won't ripen.  Last year I got loads. 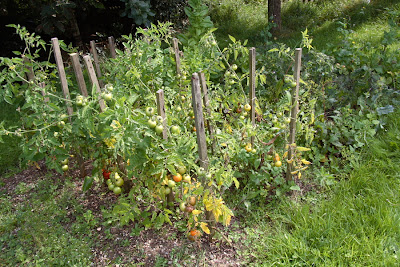 The sweetcorn are nearly ready, although the cobs don't look that big, probably because it hasn't rained much and I haven't watered them (I was on holiday), but we'll wait and see, it's the taste that's important. 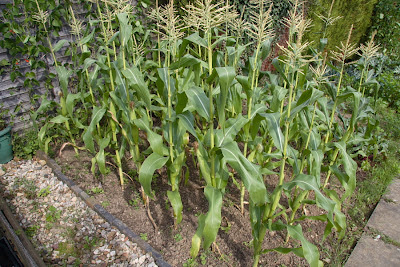