A nice day on Saturday which was used to cut the Leylandii hedges. Not a job I relish at all. I'm slowly chopping it down truth be told to replace it with something nicer, not sure what though.

Anyway, vegwise the Markies potatoes have been cooked and are quite tasty, to my surprise! They are good baked, microwaved and as chips. The Sarpos are still in the ground but I'll probably dig them up next weekend.

Here are the Sarpos with the nicely trimmed hedge behind. Notice the brown bits in the hedge caused by aphids, a prelude to complete demise. Apparently the hedge is too dense for birds to get in and eat the aphids. You can brush/rake out the dead stuff which may open it out a bit. Maybe I should try that. 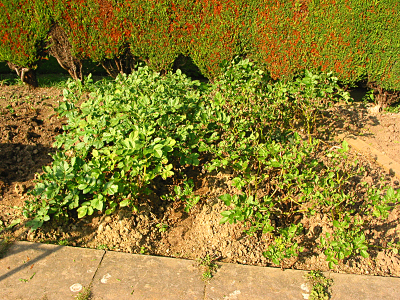 The beds are looking like it is the end of season now, autumn has really arrived. The sweetcorn has been disappointing. I rightly suspected that they had not put enough leaf on and as a result the cobs were small. Now they have gone quite tough and are not as nice to eat. 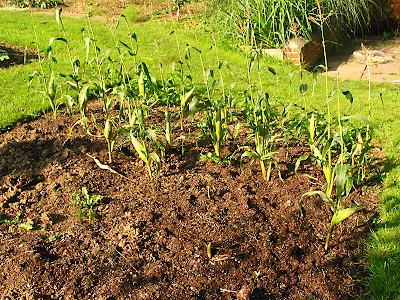 The pumpkin plant has put on lots of growth but the fruit is tiny. I have never been able to grow one yet. There's always next year! 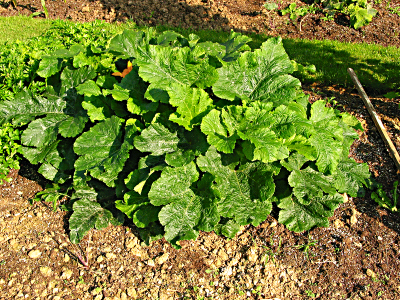 Right next door to the pumpkin is the flat leafed parsley which has grown very well. 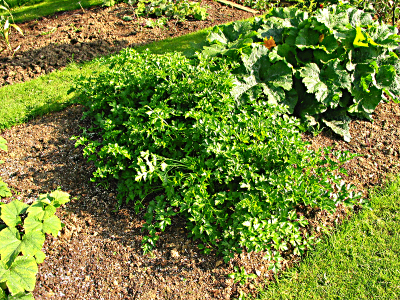 The apples were all picked off the tree and they filled a wheelbarrow. 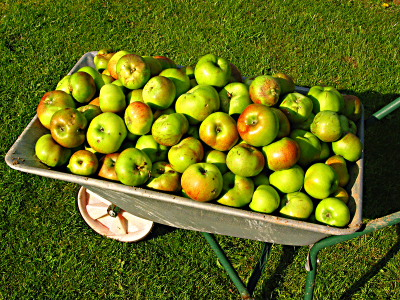 So I had a go at pressing some apples to make cider. Ahem, not a great success. I completely underestimated how many apples are needed to make a gallon. I found out after the attempt that 11kg of apples will give one gallon of juice. The good news is that my home made press did work! But it only produced 700mL of juice which is quite a bit short of a gallon. But....the juice was absolutely delicious to drink! Wonderfully sweet and smooth.

This is the press all loaded with chopped up apples (a food processor was used to do the chopping). 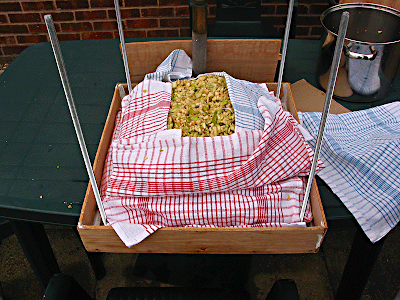 The chopped apples are wrapped in tea towels to hold them in place and then a bit of plywood is placed on top and pressed down by tightening nuts screwed onto the bolts.

This is the juice dripping out, not a great flow rate.

A proper cider press would do the job in no time, but they aren't cheap, even the second hand ones on ebay are sold at a premium. I did call a local homebrew shop to find out if they rented presses, but they only sold them. I may have another go but I need a lot more cloth to hold the mashed apples in the press and a quicker way to chop them up.

The tomatoes (gardener's delight) struggle on in the greenhouse despite the lateness of the season. There has been a big yield from them and there are still plenty left although they are getting smaller but still taste beautifully sweet. 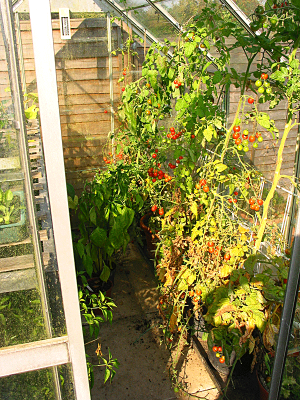 The only melon was picked and had been attacked by slugs but there were good bits that could be eaten. Melons, along with cucumbers and pumpkins are veg I haven't perfected yet.

I did get a good yield of chillis which I have strung together to dry. They are mostly green due to poor summer (?) but hot nonetheless. 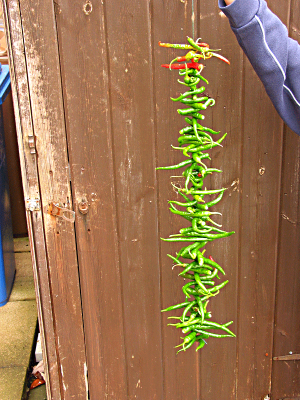 Beetroot
Raspberies
Courgettes
Runner beans - but only a few, not a good yield this year.

There are some green peppers ready to pick in the greenhouse.

Finally, I planted around 50 onion (Radar) sets in the ground where the potatoes had been and I'd added lots of compost. Next week I'll plant the garlic using bulbs from this year's harvest.
Posted by Unknown at 21:08 3 comments:

Another cracking weekend weather wise, but perhaps it's all a bit too late. The sweetcorn is getting tough now and leaving it, in the hope the cobs would swell, didn't really work. They are still edible but you can tell they are not at their peak. Also something is eating the cobs on the plant, it has to be a squirrel.

So I dug up the Markies potatoes, deciding that further slug damage was likely. There was a good yield with about one third damaged, but not enough to throw away. The undamaged tubers were stored in a pillow case! Well, I don't have paper or Hessian sacks; it was an old-ish pillow case, honest. In the gap I dug in lots more compost, this is a prerequisite for any veg garden!

The courgettes just keep coming! But at least they are being eaten as courgettes and not marrows now.

The single aubergine was harvested and eaten in a cheesy pasta meal, delicious but very disappointing that I only got one this year. I think the poor yield is because the plants were kept too wet. The pots stood in trays so as to conserve water during hot spells. But of course we never had a hot spell, so the trays filled with water from the automatic watering system. I have to balance the flow to be enough for the tomatoes which are heavy drinkers, with the aubergines and sweet peppers. I learned from the GYO forum that aubergines don't like the soil being too moist which I think explains the lack of fruit. I also think I need to get them growing a month early; February/March rather than April.

I used the spent compost from the aubergine pots to fill up the carrot bucket, after picking the rest of the carrots which have not been a big success. There was no carrot fly but they never reached a size I expected. I think this may have been to erratic watering.

I don't have any pictures for this blog, but I do need to keep a record of the veg pics at the end of the season as it's interesting to see comparisons of progress through the year.

Instead of snapping away, I spent time doing other chores in the garden such as making paths around the fruit bushes and cutting the grass. The front lawn was looking good after the cut and then I transformed it in to a dishevelled mess by scarifying it. Fortunately, I have an electric scarifier, I don't think I would do it by hand! I filled up a compost bin with what was pulled out which is always useful; it's amazing that there is any grass left.

I pickled 6 jam jars of beetroot after I found a simple recipe that looked like it would be a sweet vinegar method. I don't much care for the straight pickled beetroot, I think the sweetness brings out the flavour. I tried some and it's perhaps a bit too sweet but maybe it will mature. I would have made more but I ran out of jars.
Posted by Unknown at 12:45 No comments:

At last some nice weather! So I took advantage of the sun to dig up and dry some of the potatoes (Lady Balfour and Cara) which had started to die back. They were a bit disappointing, they had a fair bit of slug damage but some were good enough to put in a paper sack for long term storage. The Sarpo varieties (Mira and Axona) are still quite green on top but the Markies have all died down. I'm in two minds as to whether to leave them or dig them up. It's probably best to do the latter as the slugs will only eat them.

I dug in serious amounts of home made compost into the gap that was left by the potatoes in readiness for the overwintering onions and garlic. I haven't bought the onion sets yet but I won't need to buy the garlic as I will just use cloves from this year's crop.

I noticed blight on the outdoor tomatoes (sub arctic plenty), this is what it looks like. 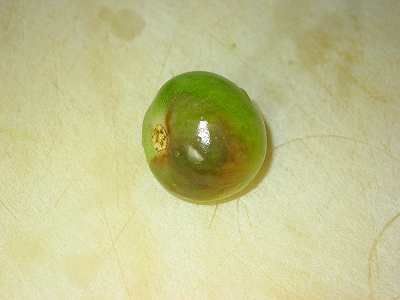 So I picked all the tomatoes green and red before they all succumbed. The green ones were made into a simple curry that was nice as a side dish. As you can see there were a lot, the surplus was frozen for a later curry meal.

courgettes - more cake and curries
beetroot - more bortsch, pickling in sweet vinegar next week
cherry tomatoes - a very good yield this year but they are greenhouse grown
green chillis - a good yield too, the greenhouse certainly overcomes the shortcomings of the British weather
turnips - getting a bit woody now and they should have been eaten much earlier
raspberries - wow, a large bowlful everyday
cooking apples - loads and loads, I plan to make some jam/jelly, give some away, freeze them and store them in the garage
Posted by Unknown at 21:44 3 comments:

In the last entry I was critical of the potatoes. Well, I've dug up some more of the Lady Balfour and I'm quite happy with the yields. The slug damage is not so bad and there is a bit of scab. The scab is due to dry soil and alkali conditions which can both be cured by adding compost. I may have contributed to the alkali conditions by liming the ground the previous season; that may have been a mistake. Perhaps I should have checked the soil pH to begin with.

Anyway, I don't think the soil is too dry at the moment! There has been a lot of rain and the river nearby has flooded again. The wet weather is the best friend of blight but the tomatoes and potatoes have not succumbed (yet) although some of the plants are dying back. 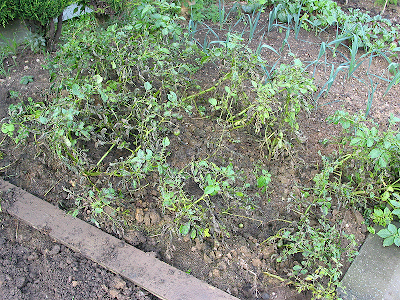 But the potatoes underneath are alright. 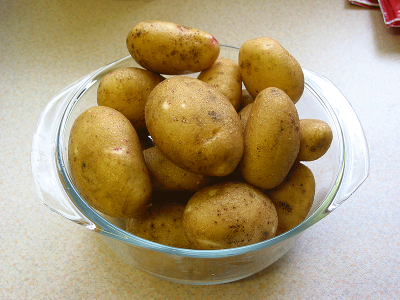 The rain has also not been kind to the blackberries. Most appear to have rotted on the plant. There are more coming but the weather forecast doesn't look favourable.

I have picked around 40 apples to make cider with; they are softening up in the garage. I still haven't worked out how to pulp them yet; I'm thinking of fitting a hover mower blade to a drill and blending them in a bucket. Could be interesting. I have made the press though.

I suppose the wet weather is good for the plants, the pumpkin is putting on a lot of leaf but I fear it is all too late. It's the same situation for the squashes. The picture below show the pumpkin plant and to the left is the flat leaf parsley which is growing well. 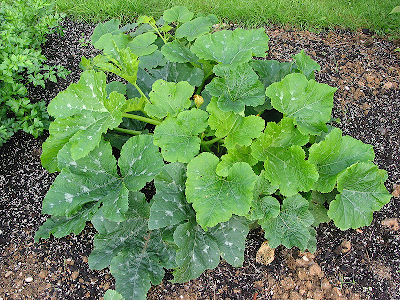 The rain has prevented me getting out into the garden and I've taken my eye off the kohlrabi which I sowed to get a late harvest. The picture below shows how brassicas in general are very quickly eaten. I'm not sure what did this damage as I couldn't find any caterpillars. I really should have put some mesh over them when they were planted out. I think I'll get an edible vegetable out of it despite the munching. 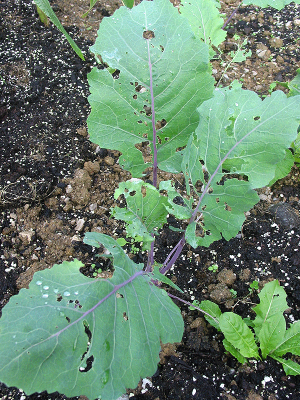 I have a lot of beetroot so I decided to make some borscht. I wasn't sure I'd like beetroot soup but it was very tasty. It includes onion and carrot plus some red wine vinegar which gives it a nice tang. I'll make some more but I'll be the only one eating it, the family aren't too keen on beetroot. All the more for me!
Posted by Unknown at 21:59 No comments: