We are having above average temperatures so it's been very pleasant out in the garden.

First off, I planted the spuds (Dunluce, International Kidney and Kestrel). They were nicely chitted. They are all earlies, no maincrop this year. I felt I grew too many last year, not because we couldn't eat them but because they took up too much space. So this time it's quality not quantity. 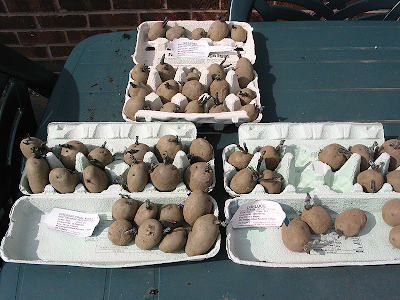 The chits show the beginnings of leaves, so they are off to a good start let's hope. 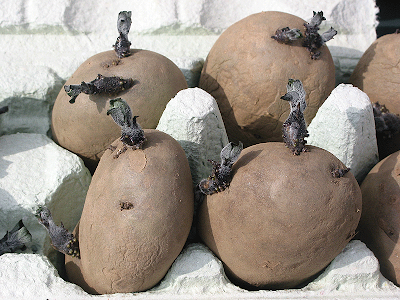 It was hard work digging the trenches; just look at the picture below to see how lumpy the clay soil is. I hadn't really dug this bed over fully since I removed the turf the year before last. By that I mean I haven't incorporated a good amount of compost during the autumn digging, mainly because I ran out of compost. But I had planned to plant the spuds in this bed in order to improve the soil condition through digging a trench and adding a layer of compost to the bottom of the trench. Here they are ready to be covered over with soil which I sprinkled with Growmore fertiliser. 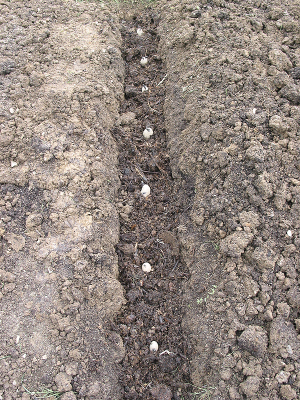 I pricked out the celeriac, I will have plenty to share with friends. 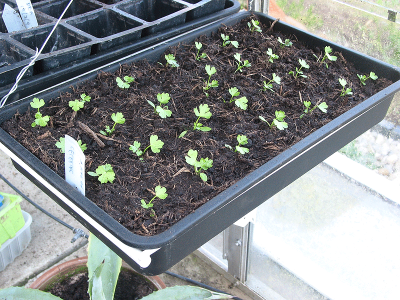 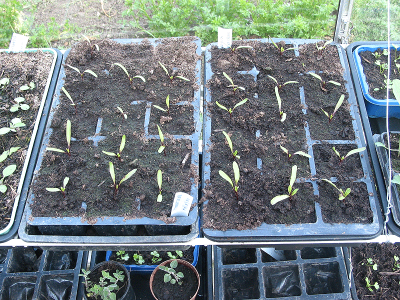 One of the cucumbers is showing signs of wilting leaves, I got this problem last year and lost all the plants. I understand that this could be stem rot. So, I'm watering from beneath to stop the soil getting too wet near the stem. 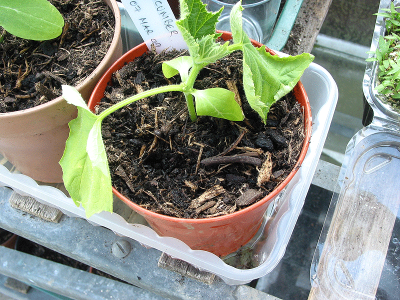 I planted out the peas. I felt I did this too early as the roots were not as well developed as I thought. But getting them out of the modules caused a lot of disturbance to the roots, so I won't do this next time. Instead, I will sow into a drainpipe and then slide the plants into a prepared trench. I've set up a net for the peas to grow up and also some peas sticks. It will be interesting to compare the two. I didn't set this experiment up intentionally, it's simply a consequence of running out of netting. 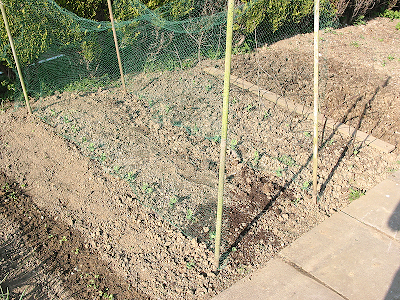 It didn't take long for the pea tendril to get a grip! 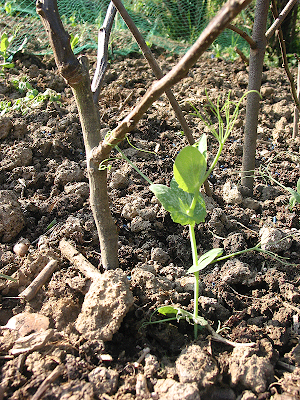 There is one rather thin asparagus spear so far. I won't be eating any until next year. I do hope that the plants get better established this season. A friend has kindly given me some of their spare asparagus spears (they have more than they can eat) which I have swapped for some of the celeriac seedlings (good deal I reckon). 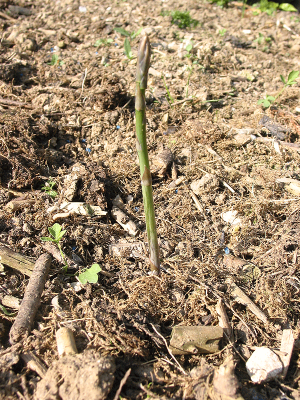 This is the middle bed after the spuds have been planted. Lumpy clay soil. The Aquadulce broad beans are at the back. 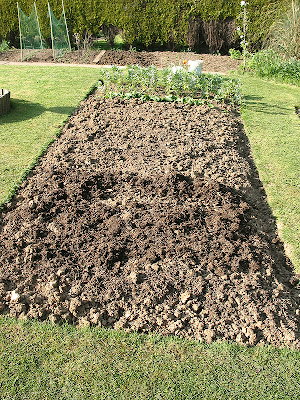 Did I mention I had clay soil? I can make pots out of this! But it will serve as a record for me to see how the soil improves as I cultivate it year on year. 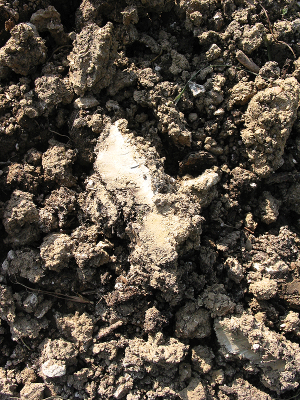 The coriander has germinated. I've sowed directly into the bottom bed which gets some shade, the idea being to promote leaf rather than flowers. 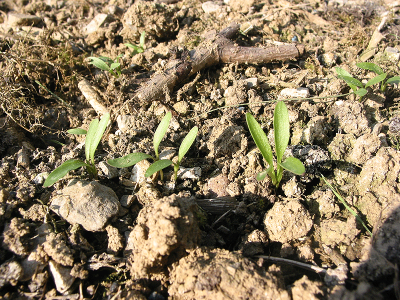 I have also sown runner beans (Lady Di), Borlotti beans ( a gift from Flummery ) and dwarf beans (Nomad) in pots in the greenhouse.

The courgette, squash and pumpkins seeds I brought back indoors from the greenhouse because the night temperatures are still quite cold.

I had a blitz and sowed some more carrots (Bangor) in the bucket, side bed and patio bed.

Toby Buckland on Gardener's World told us last week that parsnip seed viability declines rapidly. That might explain why last year's seeds had not germinated which I had started off on wet paper towel in the airing cupboard. So I bought some more, again a RHS garden merit variety (Tender and True,) and got them going using the paper towel method.
Posted by Unknown at 20:09 No comments:

Lots happening now, so this is a monster blog with plenty of pictures! The greenhouse is filling up with seed trays and pots of young seedlings and the beds will have no vacancy signs on them soon.

So in no particular order but just because that is the way I walked round the garden and snapped away here is the latest update in the Kingdom of Veg blog.

Before I walked out the door I took a picture of the basil. It's grown a lot since I last blogged about it on 11th March, less than a month ago. It does very well on the windowsill right through to winter. 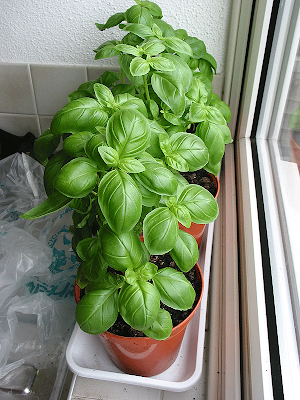 This picture doesn't look much but it's the first one that I have ever taken of carrots for this blog which probably reflects the lack of success I've had to date. I've taken the plastic cloche off them as they seemed to be drying out. I'll sow some more towards the end of the month in this bed where the soil is well cultivated (still could do with some more compost) and the carrots should form good tap roots. 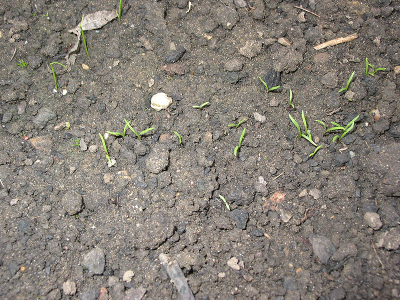 The half row of radish have emerged; they will need thinning soon. 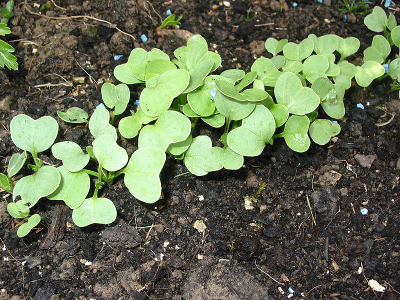 I potted up the kohlrabi into individual pots. I'm not sure this was really necessary but it will tell me how good the peat free multipurpose compost I bought from Homebase is at promoting growth. I abandoned the home made mix of turf loam and multipurpose compost of last year. It was OK but seemed to dry out quickly. Too much clay in it I suspect. Mind you the peat free stuff seems to be made of thin bark chippings. So I shall wait and see what results I get. Behind the kohlrabi are the leeks and spring onions which must have put on another inch or two since the previous blog entry (~3 weeks ago). 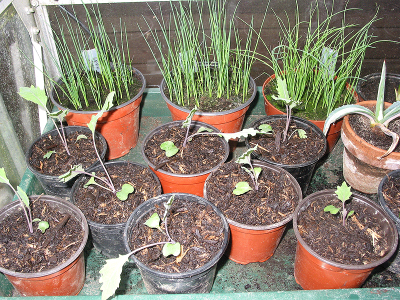 I potted the cucumbers up into bigger pots and they have been moved from indoors to the greenhouse. I think the greenhouse will protect them from any surprise frosts now. You can see the wood chip compost better. I'm being careful with these this year as before I have lost them due to stem rot caused by overwatering. So now I'm watering sparingly from below and none has succumbed (so far). 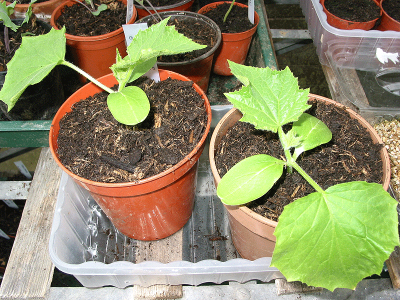 The melons and peppers have also been moved into the greenhouse. The peppers took about 3 weeks to germinate (indoors). It was old seed I suppose. 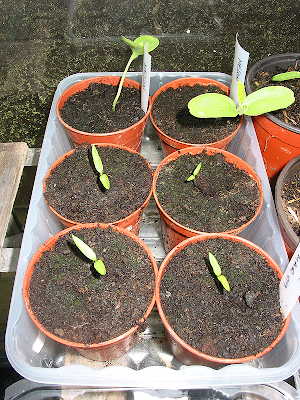 OK, this isn't veg but I get a strange buzz out of seeing neatly pricked out seedlings. It's a very therapeutic way to spend a few hours. The first weekend job I had as a kid was pricking out seedlings in a nursery; it was boring of course but rewarding when you went back next week to see them growing. These are snapdragons. 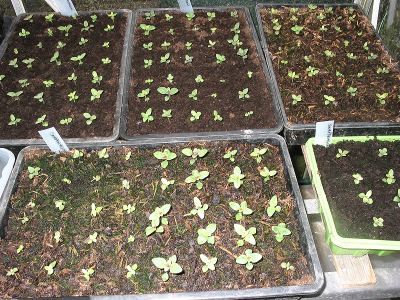 Peas in modules, the mice and squirrels can't get at them! When the roots show through at the bottom I'll plant them out. 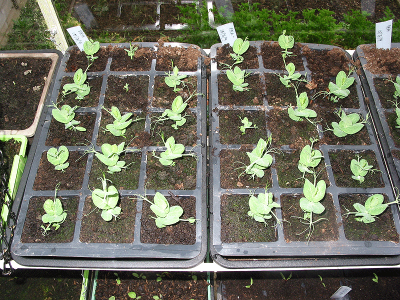 A boring picture of the Dunluce potatoes emerging but useful for the blog records. I planted 3 each in 2 buckets and the shoots popped through in under 2 weeks. I followed the instructions from the JBA seed potato website and added some fertiliser to the compost but did not water to encourage the roots to grow. I used growmore fertiliser which does not have the correct balance of NPK for spuds (so I didn't follow the advice!). I might then just get a lot of leaf and few tubers. 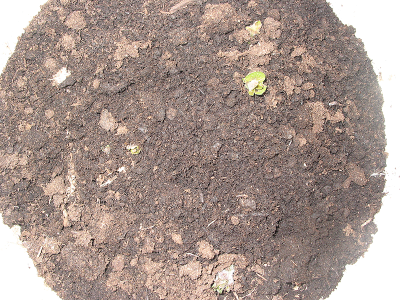 Outside in the garden beds, the overwintered onions looking hunky dory. Notice also what a lovely sunny Easter break we are having. /sarcasm. 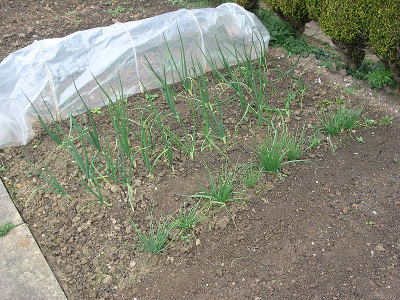 The overwintered broad beans are getting taller. 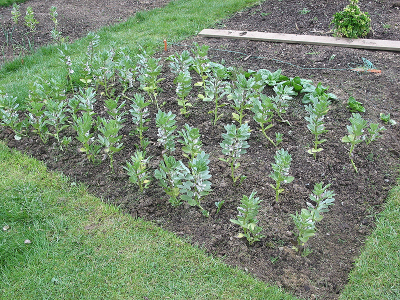 Garlic. Finally a picture of them to show that they did overwinter just fine. 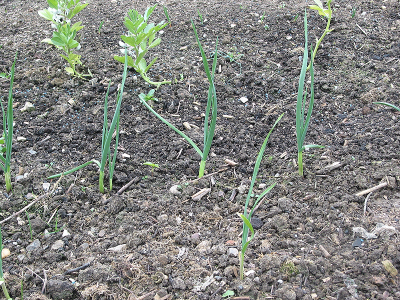 Onions sets emerging; planted them about 3 weeks ago. 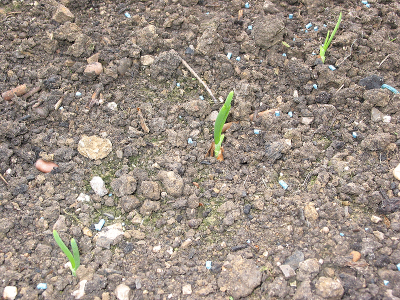 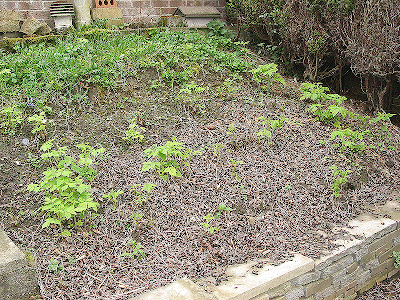 The rhubarb almost looks like a mature plant now. Behind it which you can't see well, are the puny crowns I bought and planted last year. They have only just started to show, I thought that I had lost them. 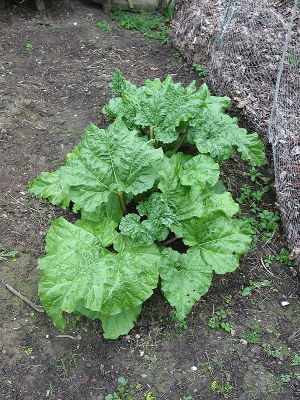 I'm hoping the summer raspberries I bought last year will really get going this year, I don't expect much fruit. I gave them some growmore and a mulch, I hope they noticed. 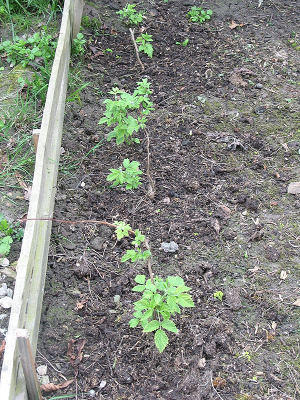 This is what my compost looks like. Quite woody really, but lower down it is acceptable. I'll be laying this in the bottom of the potato trenches. The potatoes are going to be planted in the beds where the lawn was and the soil structure is still quite dense with clay, so this stuff, I hope, along with the turning of the the soil will improve things. 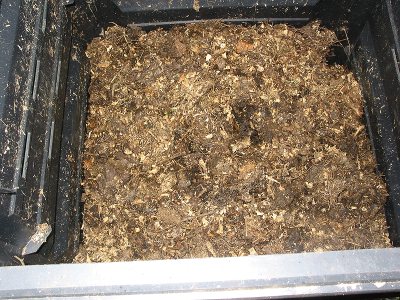 Alright don't laugh, this is my Heath Robinson style potting up station which I hastily made (can't you tell) from old hardboard. That's hardboard not cardboard! The kids also purloined it for a step up to climb the tree. 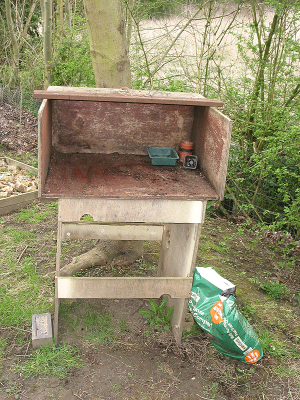 Still no sign of the asparagus, yet others are reporting theirs coming through.

I sowed courgette, squash and cucumber and left them to their own devices in the greenhouse. I've sown more than I need but if they all come through I can swap the seedlings at my work's plant swap day.

Phew! I'll leave it there. I have some more pictures of the pear and plum blossom which should provide a reasonable amount of fruit. The fig tree was moved from the greenhouse on to the patio and it is developing about a dozen figs already! No picture this time.
Posted by Unknown at 12:40 1 comment: