I took 2 weeks off work for the Easter break and had a lovely time getting a lot of the garden chores done, very satisfying, especially with some lovely weather; the rain seems to have also taken a holiday. The lawnmower came back from its service and despite its age (>40 years) it looked like new and started on the first pull. Of course, as well as mowing the lawn I did lots of weeding and sowing and planting out.

I've finished off the leeks and had these with the purple sprouting broccoli baked in a cheese sauce. There is still plenty of PSB coming.

More radish. I haven't got much room in the greenhouse for any more stuff at the moment.

Potatoes. As with last year I dug a trench and planted the spuds on a good layer of compost. The compost was not fully rotted but will hold the moisture nicely.

The asparagus has sprouted and there will be enough for a meal or two (hopefully more) which will be the first harvest ever. 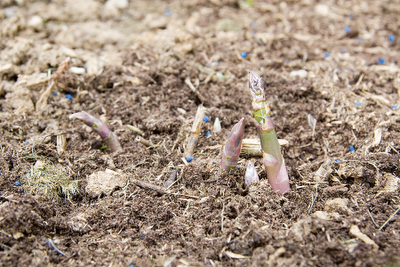 The broad beans are flowering. It didn't look good for these plants a few weeks back but nature finds a way. 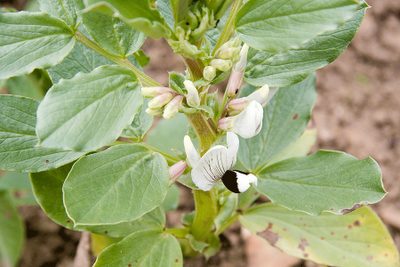 The early peas (Meteor) are attaching themselves to the pea sticks, but the germination rate of those I sowed later (celebration variety) in the greenhouse has been very poor. I will definitely have to sow more as these were very good eating last year. 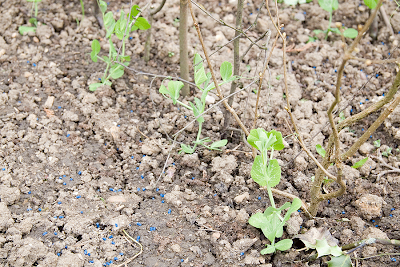 The radish are growing well in the greenhouse. I'm trying them out this way instead of sowing directly outside. They certainly grow faster and look better, hopefully they taste good too. In the picture below, the radish are in the foreground with kohlrabi behind them and the beetroot behind the kohlrabi. 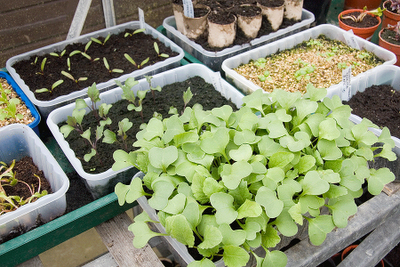 A second sowing of spring onion. This method is working well. Sow a few seeds per station in a seed tray and then when they get to a good size, plant the clump outside. 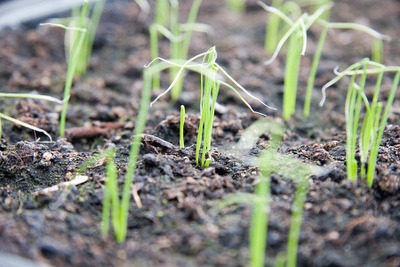 Last year, I bought basil from the supermarket and grew that on but where is the fun in that? So, this year I have sown my own (I had the seeds anyway). 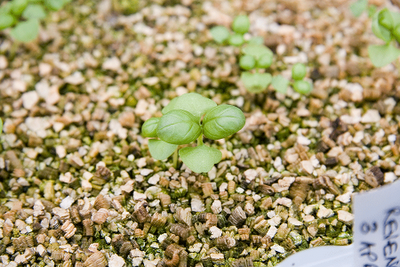 I'm pleased to report that the fruit trees are all showing good numbers of flower buds including the new greengage and cherry trees. I think the pear tree will be first into flower though.
Posted by Unknown at 19:44 4 comments:

It's April already and yet spring still feels like it hasn't arrived. At last the daffodils have flowered and there are signs of bud break on the trees. Ever the optimist, I've being busy sowing and planting.

First up though, I have been thinking about what to grow against a north facing fence that replaced the Leylandii hedge. It's a big expanse of boring wood that is close to the conservatory and is crying out for some green cover. As ever, with my economical nature, I wanted to get something that was edible. So my initial thoughts of a flowering climber were quickly replaced. The decision turned out to be not too hard as there are not many fruit trees or climbers that will grow on a north facing aspect. The solution came in the form of an acid cherry. As luck would have it I stumbled across a free cherry tree offer on the internet. All it cost was the post and packing at £6.99. So it came last week and it's now planted and pruned. Maybe the link is still alive and there are still free trees on offer? 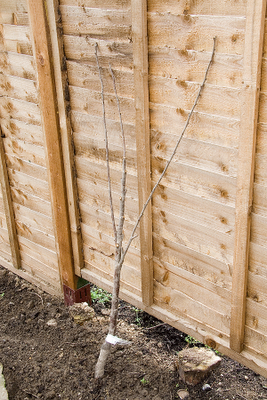 I've severely pruned it so that I can train it into a fan against the hedge. The idea is to promote two lateral branches from which further laterals will develop. It came bare rooted so it will need lots of watering.

The greenhouse is looking more like its purpose, full of seed trays. 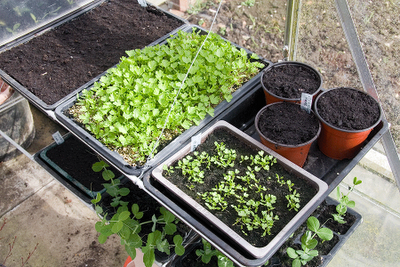 And it has that lovely warm feel to it at last. 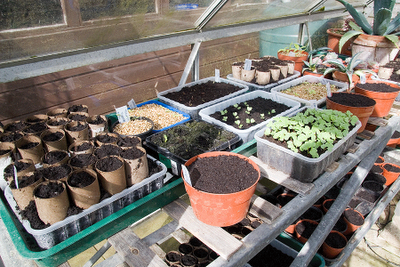 Notice the loo roll method of growing parsnip and peas. 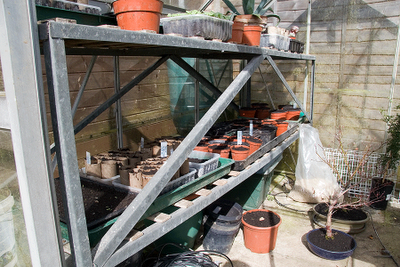 I put the fig outside so that it can get more sun as the greenhouse gets afternoon shade. The embryo figs are starting to swell nicely.

I planted out more strawberry plants that I'd propagated from runners last autumn. I was going to give them away but decided you can never have enough strawberries. The soil here was good for making pots, so much clay! I thought it best to grow the strawberries in it rather than struggle to get it in good condition. I can concentrate the compost application to other areas for now. 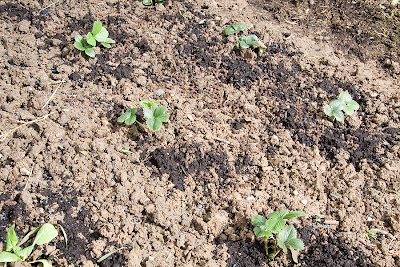 The gooseberry has plenty of pristine leaf, although it's far from a bush at the moment and will need a few years before it produces a decent yield. 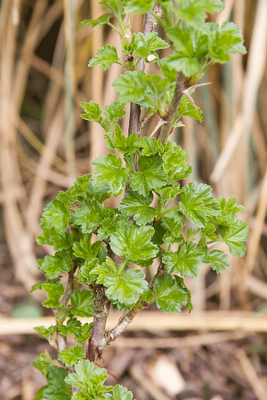 The redcurrants are also looking rather stick like after I split the original so that I can prune them properly to form a productive bush; again I'll have to wait a few years for some decent yields.

The buds on the plum tree should open any day now.

All five of the rhubarb plants are sprouting which should allow me to force each crown on an annual rotation. The biggest plants look like they can withstand forcing so I'll try one of them next year. 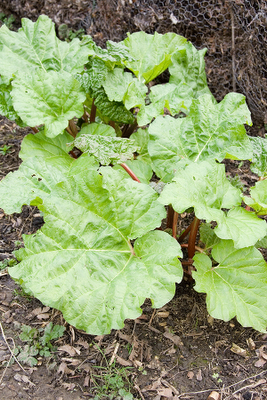 I have also planted the spring sown onion sets and the spinach. But I still haven't planted the potatoes, that will happen in the next few days.
Posted by Unknown at 13:26 3 comments: