The cold weather persists and does not make me want to go outside much.  But time marches on so I decided I had to do some sowing and I sorted through the seed packets, bought some multi-purpose compost and got on with it.

Now there are seed trays in the greenhouse with broad beans, red and white onions.  I decided to try onions from seed this year. 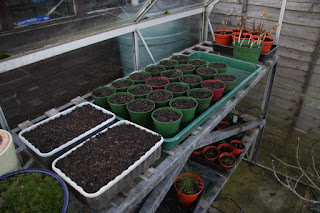 On the floor are two buckets of leeks. 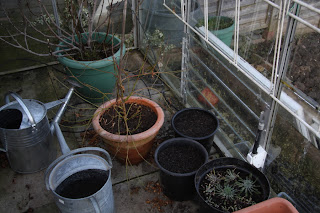 There's a peach tree (self sown) and fig tree keeping them company.  I had a look at them to see if the cold weather had done them in but I'm glad to say that there are viable buds.


However, the cold and wet weather has destroyed my home made cold frame.  The plywood has rotted and won't support the window frames anymore.  I'm in two minds as to whether it's worth making a new one. 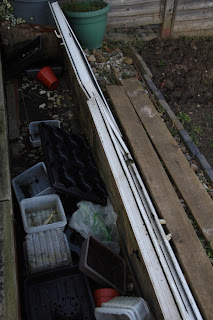 I started the chitting process for the spuds in the unheated conservatory.  These are the pink fir apple. 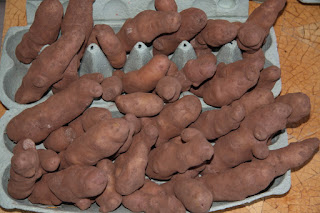 And the kestrel which are already showing sprouts. 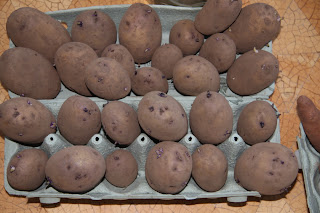 The first post of 2013.  The lack of postings is because I haven't done anything in the garden.  Simple as that, plus there's been a fair bit of the white stuff.

When the snow did clear away, I still haven't done much as the soil is too wet to work. I still have beds to dig and tidying up to do, so I can't slacken too much, it will be spring in no time.  I need to sow some onion seeds, leeks and broad beans.

It's also nice to receive a delivery of the seed potatoes.  It gives a real sense of the new season starting.  I've ordered more this year, maybe a mistake with the ever increasing threat of blight? There is the usual favourite variety of Kestrel and I'm trying out a nice salad potato, pink fir apple. 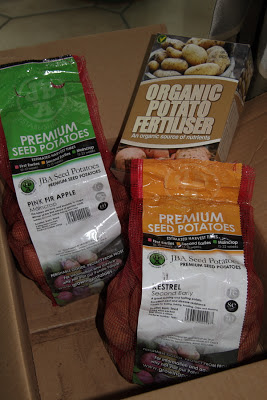 I am still harvesting beetroot and parsnips which is a nice bonus. 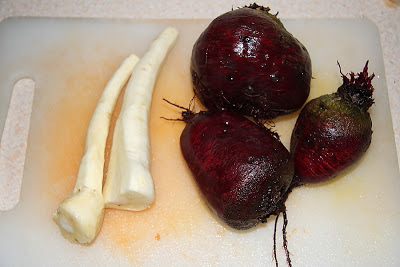 There are leeks too, but they aren't very big and there is some leaf miner damage.

I'm looking forward to next weekend when I can get stuck in to the sowing, digging and tidying up. Weather permitting.