I spent the weekend harvesting and processing the soft fruit.

I made gooseberry and redcurrant jam.  I then  made an apple and blackcurrant crumble using stewed apples from the freezer and that was very nice.  I must remember to freeze apples again for next year's blackcurrants, they go together so well.

More strawberry ice cream and smoothies were made and also there was enough strawberries left to make a couple of jars of jam with some gooseberry to help it set.  I also picked a few tayberries and froze them for next weekend when I can combine them with the strawberries for more jam.

The aubergines have several lovely flowers on each plant which I hope will translate into fruit, I've only managed one per plant in previous years. 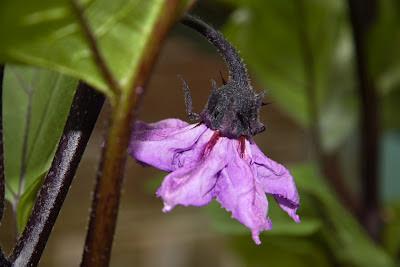 I bought some supports for the climbing French beans and made a wigwam. They didn't take long to start wrapping themselves around the poles. 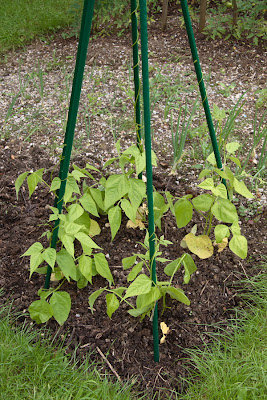 The dwarf beans have grown fast and so have the weeds that are a consequence of using home made compost as a mulch.  It's surprising how many are tomato plants.  They were easily dealt with by running  the hoe between the rows; they then dry out rapidly and I usually leave them there as a mulch. 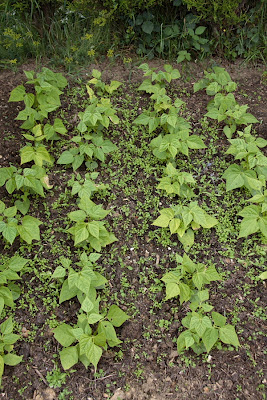 The sweetcorn is shooting up and soon the gaps between the plants won't be so obvious. 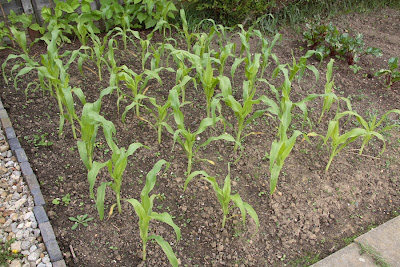 The courgettes have flowers.  They look lovely in the morning sun. 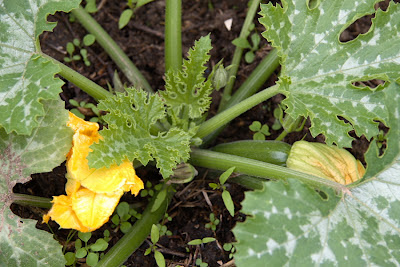 Down by the blueberries I have cleared the area of wood I had stored to make another hedgehog house, and in its place are the fig tree (which has finally greened up - no figs though), two squash and two cucumbers plants in pots. A much better use of the area.The cracks between the slabs are a haven for dandelions though.  There's also the bay tree in the green bucket which is recovering after I had to prune it back hard following the harsh winter of 2010/11. 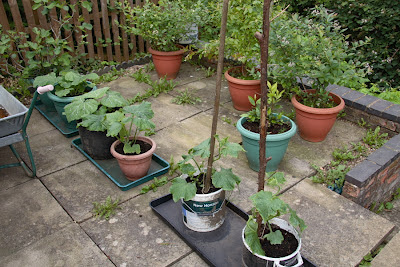 Not everything is rosy though, I do have failures.  The pear tree has got a bad rust infection again. Nearly every leaf looks like this. 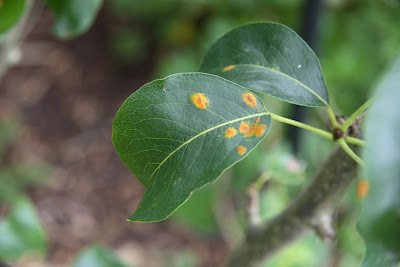 In my problem area under the apple tree, very little will grow well due to the low light levels.  The kohlrabi are not swelling up and have aphids, yet the turnips seem OK, so maybe I'll just grow turnips there. 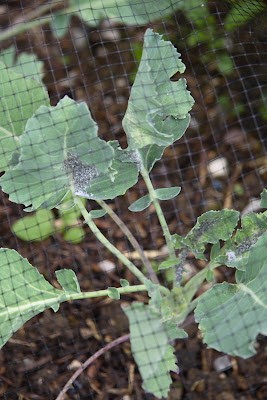 My onions are very bad too.   I doubt I'll have enough for a year's supply.

The harvest begins in earnest at last.

The first of the kohlrabi was pulled; they are still young and so they are lovely and tender.  I have successionally sown them so I won't have any old and woody ones which don't make good eating.

Peas which are really good this year, I guess it must be the wet weather keeping them nice and plump.
Beetroot which was also good and tender.
Onions: the overwintered ones had started to keel over and were not going to swell any more, it's not been a good year.
Broad beans: there are plenty of these with big, fat beans.  I've got so many that I have cooked them all, popped them ot of their leathery skins and froze them for later (stir fries are nice).
Strawberries: a lot have rotted on the wet ground despite the straw and they aren't overly sweet due to the lack of sun but they make delicious ice cream and smoothies.

The greenhouse is all set up for the summer now.  The aubergines and sweet peppers have been moved from the top to the middle shelf so that they won't touch the glass.  The tomatoes, cucumber and melon are all growing fast. 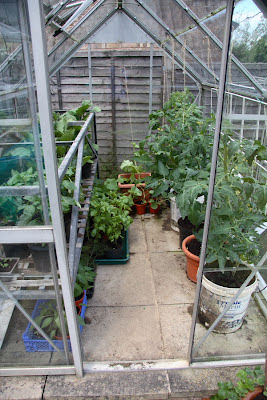 I managed to find two places to grow the leeks, they look neat an tidy in their holes. 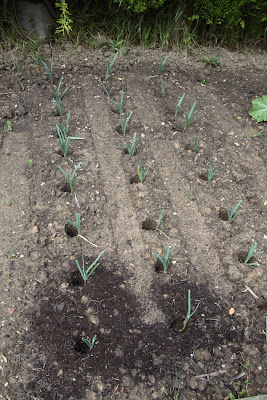