So, it's not leek moth but allium leaf miner that has destroyed my leeks. Apparently, this is caused by a fly which lays eggs in the leaf and the caterpillars mine down the stem and then pupate overwinter. The pupae are characteristically brown as opposed to the creamy colour of the leek moth's. The damage to the stems allows infections to occur resulting in slimy, rotting stems. It first appeared in 2002 in a garden in Wolverhampton having somehow been transferred from Europe. However, my father who lives near Southampton says his leeks have got it too, so it has spread quite far in only 8 summers.

I spent a tough afternoon struggling with the apple pruners on an extendible pole. But managed to prune both the apple and pear trees. This is a photo of the nice spurs on the apple tree that are developing and where the blossom and fruit occur. 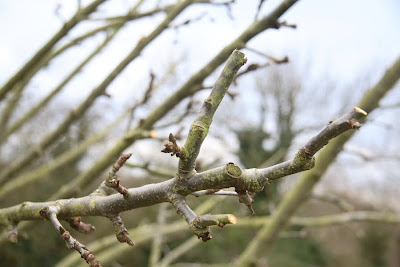 Mind you, I need to look after the apples a bit better than I have this year. I thought they would be OK in the shed but the freezing temperatures damaged most of them. Those in the garage have been discovered by mice. So I'm not sure where to store them next year.

The Swiss chard has some green shoots poking through when I thought it had been destroyed by the snow and ice. 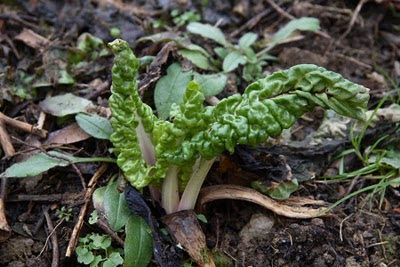 I'm not sure about the purple sprouting broccoli though; hopefully some shoots will emerge soon. I have covered it with netting to keep the pigeons off. 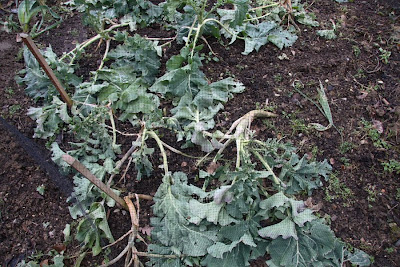 The fox is making a distinct path as he/she walks across my onion bed. Maybe it's not that obvious in this picture. 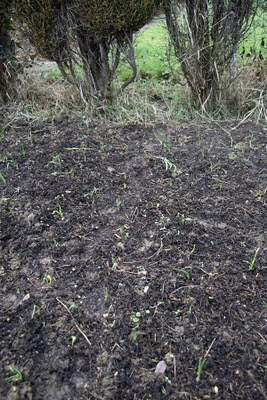 Nonetheless, the onions are growing. 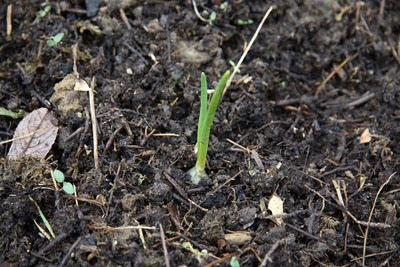 Finally, as part of the garden clean up, I made a hedgehog house from old fence palings. I'm quite pleased with the result but the truth in how good it really is will depend on whether it gets occupied. I do hope so as I haven't seen a hedgehog for quite some time. 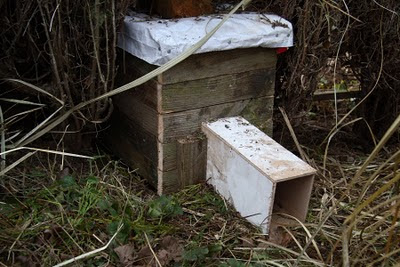 Still not much happening in the garden. I'm focussing on tidying it up by getting rid of the compost pile. To do so I'm emptying out the compost bins that are ready and then I'll start filling them again. I sieve the compost as it is quite twiggy which then gets recycled back to the compost bins. I am laying it on the side bed without digging in. Hopefully, the worms will drag it in from now to planting time in spring. 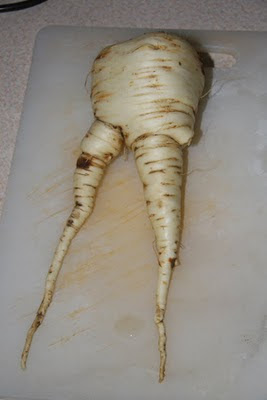 So this year I'm going to try direct sowing.

The leeks have been ravaged by leek moth which I haven't had a problem with until now. That's because it has normally been a problem in the south but it is obviously moving northwards. I will have to monitor the plants closely this year. The caterpillar migrates down from the green leaf into the white stem where the brown pupae overwinter. The picture below shows how the stems are shredded by the caterpillar eating its way down the stem and leaving tracks marked by brown edges. If the leaves are removed then the inner parts of the stem are OK and edible. 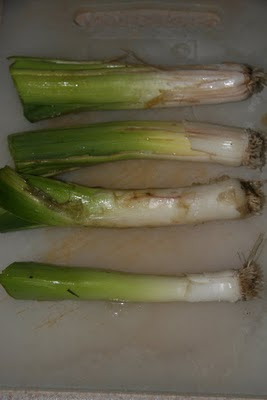 Well, I did manage to pick some Brussels for xmas although they were frozen! They were on the small size but tasted great. I think that will be about my yield though. I think this is due to them being sited near the shade of the apple tree. They obviously need more sun. I'm not convinced I will bother any more as they take up too much space for little return.

I also tried to dig up some parsnips to roast but the ground was solidly frozen.

There is a benefit to freezing the soil which is that the ground expands and contracts as the water freezes and thaws. I noticed just how much the soil lifts up as the freeze sets in. This should encourage mixing of the soil and introduction of air leading to better soil condition. This picture shows how the soil surface gets broken up by the action of freezing and thawing. 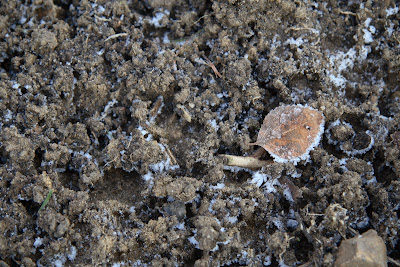 The downside of course is that vulnerable plants don't survive. For example, my Cordylline is no more. 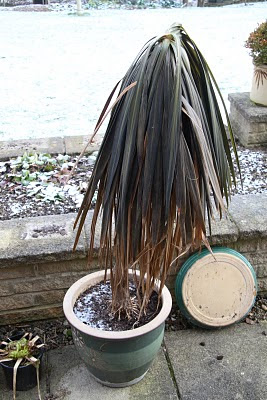 The Swiss chard looks ruined but I suspect it will pull through. But the purple sprouting broccoli despite flopping over looks fine. 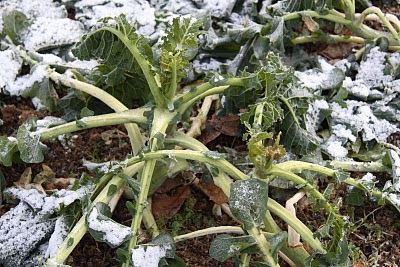 The broad beans in the greenhouse don't look good and have a lot of black stems ; I'm not very hopeful. 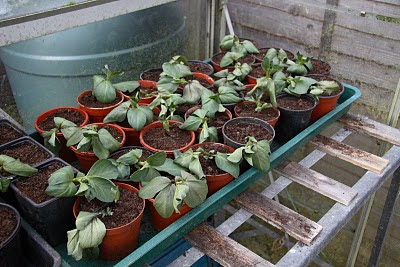 When it did finally warm up, I weeded and mulched the asparagus bed with the spent compost from last year's containers. I did want to do this earlier, but the compost was frozen. This is sounding familiar! 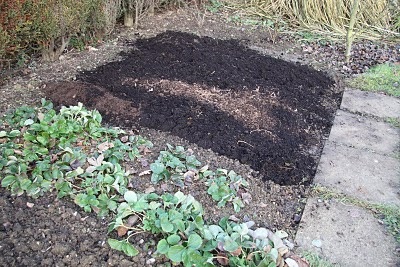 I raked up all the leaves (after the snow had thawed) and have a nice large pile for spring 2012. 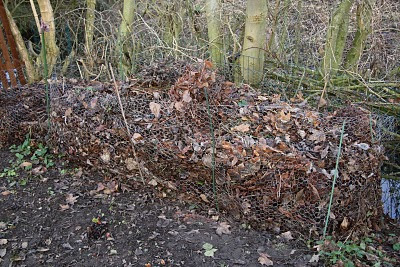 One thing I could do regardless of frozen soil, was to make new compost bin out of the spare fence pailings I had. I ordered too many. The final bin is huge, but I soon filled it with the compost pile I have generated from the hedge shreddings and grass clippings. Not surprisingly, the compost was frozen! 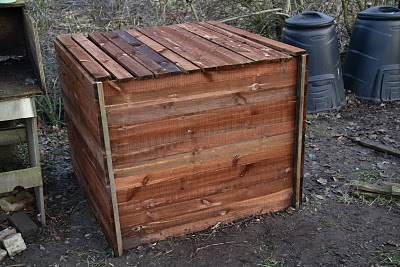 The inside of the compost pile was amazingly dry and so not much rotting had taken place although clearly a lot of fungal growth had occurred (not clear in this picture of what was left of the compost pile after emptying it into the bin. I still have a fair amount waiting to go into bins). 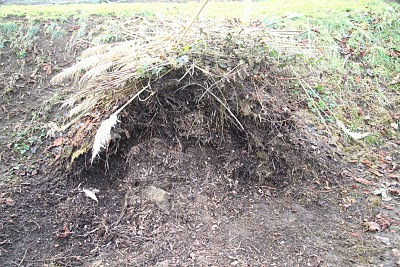 And despite all this prolonged period of excess cold, I was amazed to find rhubarb leaves showing. 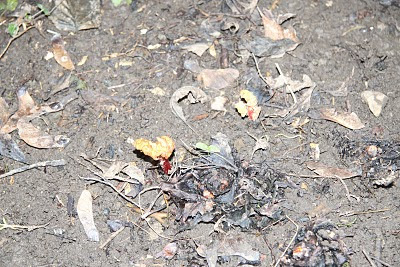