skip to main | skip to sidebar
At long last I fitted the louvre window and its automatic opener to my greenhouse. It's warm enough to be working outside without having to wrap up. I really enjoy being outside on mild days and observing what is starting to grow, such as daffodils, snowdrops (in flower) and bluebells. Marvellous.

Anyway, back to the louvre window. It took longer than planned because I thought it would have to rest on a pane of glass rather than it sitting at the bottom of the greenhouse where I wanted it. I think this would provide better ventilation. First mistake, and not the first time I've done this, is to measure the size of the pane wrong. It was 2cm to tall. Second when I fitted the window at the top it wouldn't allow the louvres to move as it was fouling the frame of the greenhouse. I was about to chuck it all in the bin when I returned to my original plan. As it turns out the louvre does allow a pane to rest on top of it and with several glazing clips in place the glass is held firmly. 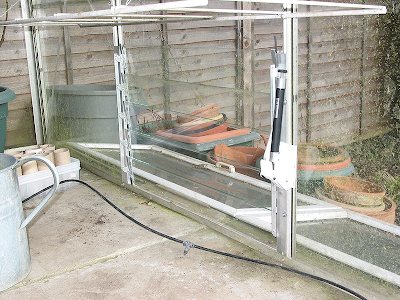 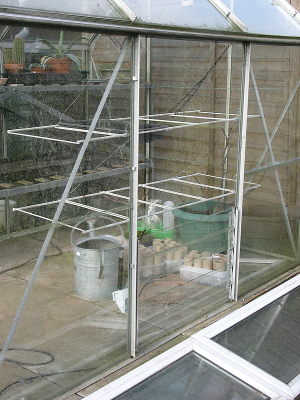 I had to have new louvres cut as the ones provided were not wide enough (but I knew this might be a problem despite the information provided with the window stating that it would fit most greenhouses; mine is not in the most category). I fitted those eventually after getting confused which way up they go. Then I find I need 5 glass louvres whereas I ordered only 4; second mistake. So suitably frustrated, I was in the mood to cut my own glass. I have several panes lying around with broken corners from when I moved the greenhouse but enough to cut a louvre from. I laid a layer of dust sheets on the patio table and cut the glass on this with a long piece of heavy wood as a guide. To my surprise it cut easily. Then I cut the 2cm of the new pane that sits above the louvre and I was successful at that too although it wasn't a clean cut. It all fitted together finally and the day was saved. It could have turned out so differently and if so I would have been too embarrassed to blog it.

Finally, I put up the temporary shelving ready for the seed trays that fit in them, but I need to buy some new seed trays. Notice also my trays of loo rolls ready for the parsnips. Those trays are what Sainsbury's sell their mushrooms in. 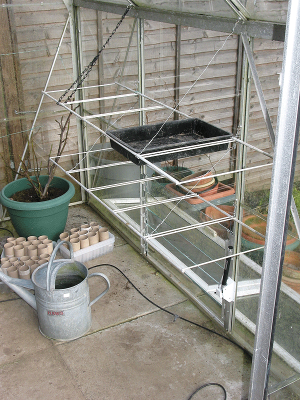 I have been inspired to start sowing now. The temperature has reached ~20°C in the greenhouse. So I took the plunge and have sown aubergines and chillis in 3" pots which are on the windowsill indoors. In the greenhouse I have sown some broad beans in individual pots (only to use up last year's seeds), leeks in two 5" pots about 100 seeds in each and some more spring onion (white Lisbon) in a 5" pot. Those I sowed last October had grown to about 4-5" and I planted these outside. I've read on David and Karen's blog (Evington Hilltop Adventures) that this is their method for success, although I have planted mine out individually rather than in blocks. 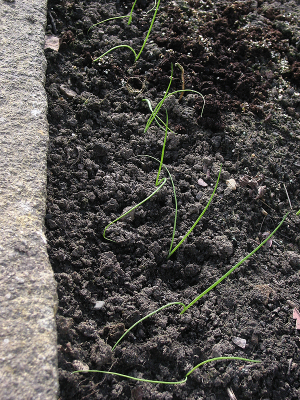 Finally, a work colleague provided me with a strasberry plant which she grew from a seed from the fruit she bought at a supermarket. They are a cross between a strawberry and raspberry; it looks like a normal strawberry plant (so no picture). I've not heard of them before.
Posted by Unknown at 16:07 5 comments:

The milder weather has encouraged me to plant out the broad beans, also I was worried that they were getting pot bound and on a sunny day they might dry out in the greenhouse. So here they are in 2 double rows. 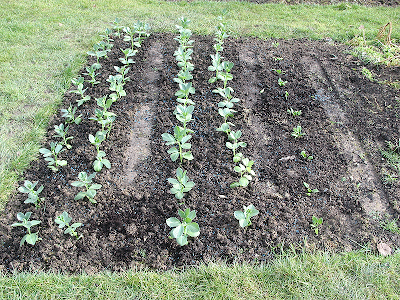 That should provide ample beans for this year.

To the right I have planted out some spinach which I sowed last October. Perhaps I should put a cloche over them to bring them on a bit.

The garlic hasn't done much through the winter but hopefully all the action is happening below ground, the individual clove is meant to be splitting I think. 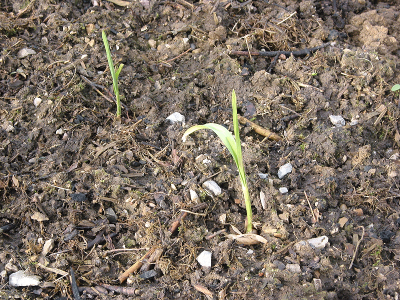 There is still no sign of the second row of garlic I planted.

The rhubarb is emerging although the first shoots have suffered from the cold. This is one of the original crowns I got from my father and it's now the third season, so I should be able to harvest a good few sticks. The other 1 year crowns I bought have not emerged yet. 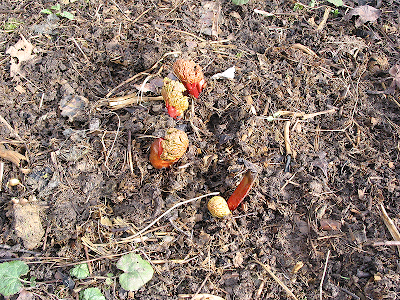 The weather feels like it is warming up and I'm looking at my seed packets. Perhaps I'll sow some in the next few days. I will also fit the automatic louvre windows to the greenhouse before I fill it up with seed trays. It's a lot different to just a few days ago. These were the blueberries in their pots on the patio under a blanket of snow. 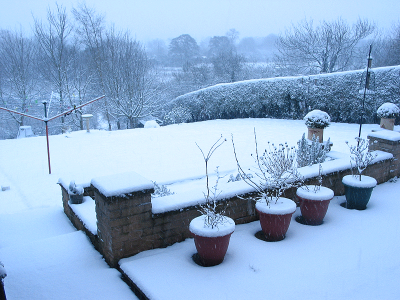 I pruned the apple tree yesterday using the pruners I got for Xmas. They attach to a long pole and I was able to cut back the long branches that I couldn't reach last year. Great tool. I still have apples stored that are holding up well although a little shrivelled, but they are still good to eat.

The autumn fruiting raspberry canes have been cut down to ground level and there are new shoots coming through. The wooden supports for them have rotted at the base so I will have to rig up something more permanent.
Posted by Unknown at 15:56 No comments:

I put my seed potatoes into egg cartons to chit today, but only the earlies (International Kidney and Dunluce) not the maincrop as they don't need to be chitted apparently. However, as you can see from the picture below, they are well on their way to sending out sprouts which is because I left them in the warm house rather than in the cool (no, very cold!) conservatory. Ooops. 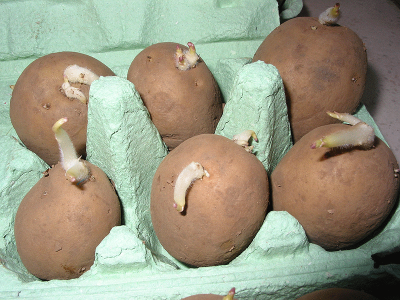 I dug up two remaining parsnips today. I had to scrape away the snow to get to them. They were on the small side but are now in a casserole along with some parsnips I froze from last year! Did I have that many?

My father has sown his parsnips already but the seeds I have (Excalibur) don't need sowing until April.

I could start sowing this month, although I think it is still too cold even in the greenhouse. I'm going to wait a few more weeks. The veg I can sow are:

Chilli (De Cayenne): these grew very well last year and got a good crop some of which I dried and are still available for use (haven't done so yet though). I'm still using last year's seeds.
Flat leaved parsley (last year's seeds again) another good yield last year
Aubergine (last year's seed): not a good crop due to overwatering, that's easily rectified.
Tomato (gardener's delight): last year's seed, good yield.
Leeks (porvite): new seeds
Broad beans (Jubilee Hysor): I have about 10 seeds left from last year so may as well find a spot for them.
Posted by Unknown at 15:35 No comments:

Like everyone else I have taken pictures of the garden covered in snow. It's not too bad here in the Midlands, but the snow has been getting steadily heavier this afternoon and now the roads are very slippery. The gritters have not been round here since last night and we are on a bus route, I expect they are busy.

Here is the side bed this morning. 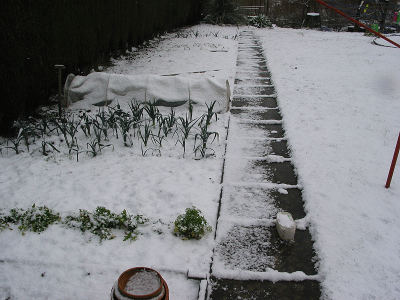 And looking back to the greenhouse and shed. 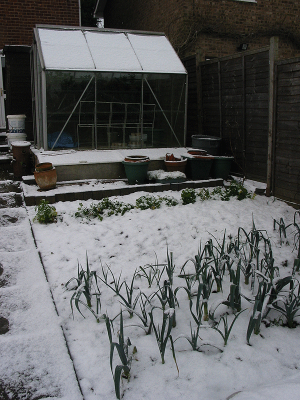 Working form home today along with many others; the internet is probably under heavy usage.
Posted by Unknown at 16:06 No comments: