Not much to report at the moment. I've removed plants such as courgettes and sweetcorn and added them to the compost bin.  The blackberry and tayberry have been cut back and the new growth tied in to the frames for next year.

All the apples have been picked and only the beetroot, leeks and parsnips remain.  The bare beds look a bit sorry for themselves especially with the spent compost from the tomato plants dumped on them rather haphazardly.  I could and should dig the stuff in, but I need to add some more compost from the bins so that will mean sorting them out; a messy job.

I harvested some parsnips last weekend after a frost, so they should be nice and sweet. Well they were a pleasant addition to the Sunday roast.  But they have canker which always happens for me, fortunately it is easily removed with peeling.  I'm quite pleased with the length of one of them and there's very little forking which indicates my soil is getting better. 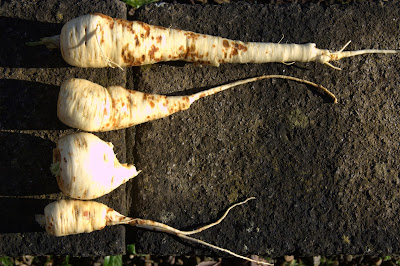 In the greenhouse the sweet peppers have probably stopped growing and are slowly turning red.  I'll pick one soon and take a picture of my pathetic effort.  I'm going to concentrate on growing chillies from now on as I do use a lot of them in curries.
Posted by Unknown at 18:09 No comments: