I planted out the overwintering onions (First Early variety from Thompson & Morgan) along with a row each of garlic and shallots (using this year's bulbs). Within 2 weeks of planting the onions are already showing green shoots which I put down to the lovely warm weather in combination with a good bit of rain. 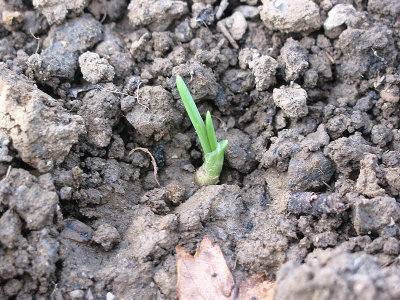 I sowed the Aquadulce broad beans in small pots and they now sit on a shelf in the greenhouse. I also have started to collect leaves of which I can not get enough. I am lucky to have deciduous trees at the bottom of the garden and lately they have been shedding their leaves. I filled the small leaf mould cage very quickly and there are still lots more to come. The large adjacent cage is already full of shredded Leylandii which I reckon may take several years before I use it by slowly adding it to the regular compost. So, I will have to use the black bag method again for the leaves. Other than that not much is happening.

This is the side bed with the leeks and purple sprouting broccoli behind it. 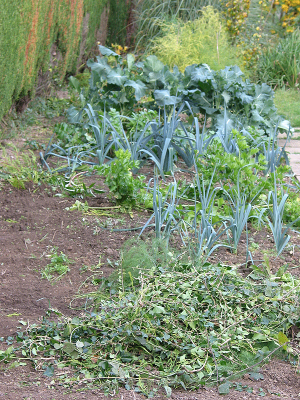 And some nice hedge clippings in front.

My compost bins are full and so with all the clipping and pruning at this time of year, I have big piles of green stuff scattered around the garden; I am trying to make as much compost as possible. Next year the beds should really benefit from a huge onslaught of added compost (I hope).
Posted by Unknown at 22:52 No comments:

At long last it has rained which is very welcome because I want the soil to soften up so that I can plant out the overwintering onion sets, garlic and shallots. The picture below shows just how bad the soil had got in the bed next to the hedge and has developed large cracks. So still some way to go to get the soil condition right, despite my previous post where I was more upbeat about the soil in the bed where the spuds had been. It just goes to show that you can never dig in enough compost. 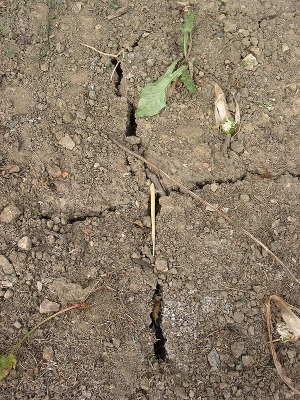 The chillis in the greenhouse are putting out new shoots and look in good shape for overwintering. 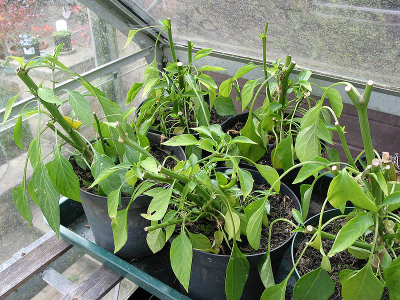 I have removed the environmesh covering the purple sprouting broccoli as it was restricting growth. The plants look really good and I hope it produces some good florets next spring. This will be a first for growing and eating. 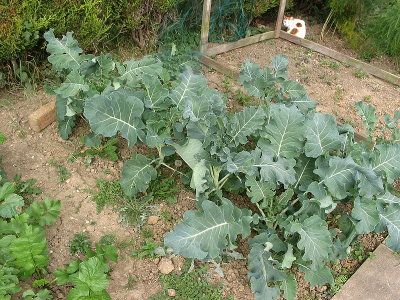 The Brussels sprouts have been rather neglected because I have not made a veg cage to protect them properly. They did have netting draped over them but this has not been sufficient to keep the pests off and the top leaves have been attacked. However, there are some good sprouts coming along and there will be some for xmas. There are plenty anyway but I won't be trying any until there is a frost which should improve flavour. 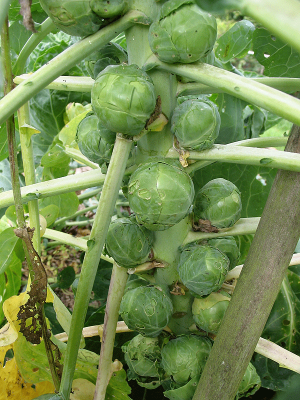 I would like to be digging in more compost (soil condition permiting) but I have none so that will have to wait, hopefully there will be some in the spring. In the meantime I shall be collecting leaves for leaf mould
Posted by Unknown at 21:10 2 comments: