This is an update on the pictures I should have taken last blog. First are the chillis in the greenhouse looking very straggly; I don't think they will survive the winter especially since today and yesterday saw a heavy frost which is very early; some parts of the country had snow. 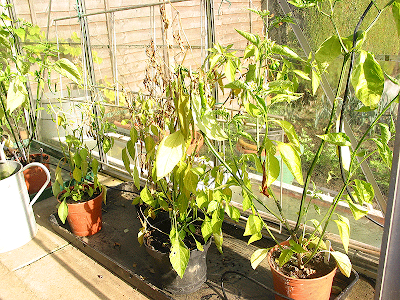 These are the broad beans in pots trying to germinate. No signs yet. I've got enough I think without needing to do a second spring sowing. I've still got broad beans in the freezer from last year! 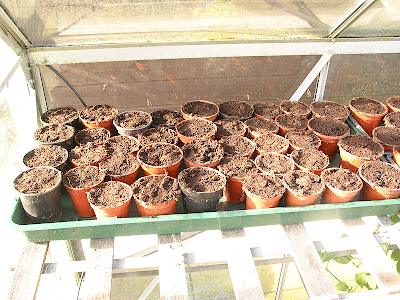 The spring onions have germinated after all! I can grow them. They are on the right in the picture below with the spinach in the other pot. 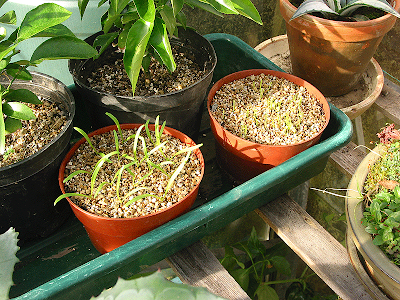 Below are the lettuce underneath the plastic squirrel protector domes. 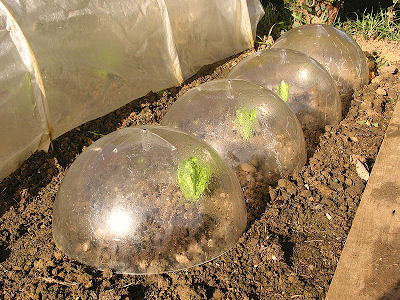 And some more under the cloche. 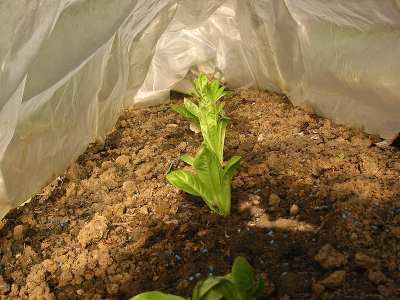 I planted these on a lovely sunny autumn day and was quite hopeful that they will put on some growth but the latest cold snap will probably slow them down and I may be lucky to get much at all. Maybe I'm expecting too much and perhaps I should just pick the young leaves.

A good thing about the frosts though is that it will kill off many of the overwintering pests, hopefully some of these guys. 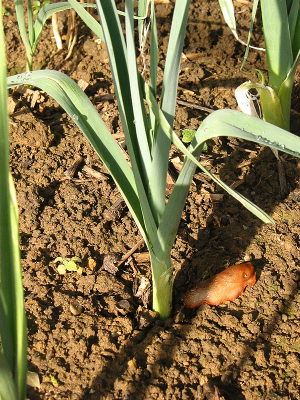 The onions are showing their green tips, a lovely sight. 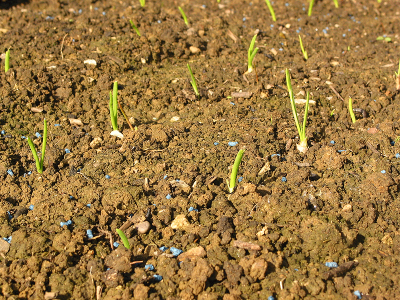 The garden chores are slowing down now. I've been digging in some compost and last year's leaf mould in the bottom bed. I will have to continue to collect this year's leaves. I want to make two permanent cages for the leaves, one for the current year and one for last year's. I'm undecided how to do this at the moment. I'm inclined to go for the simple chicken wire cage, but I want to make them really big as I can collect a lot of leaves.

Now that we have had a frost I can try the leeks and parsnips, they should have sweetened up nicely. The horseradish will be good to dig up too, I'll need to get the ingredients to make some horseradish sauce.

The cold weather has driven me indoors and into the kitchen. It's warm when the oven is working. I made some more pickled beetroot and two jars of apple jelly. The jelly has already been tried on sandwiches by the kids, so I'll probably be making more which is no problem as there are a lot of apples to get through. I had a go at making an apple pie too. For some reason I had thought there was some magic art to making pastry but on the BBC food website there is a video masterclass that shows you how using a food processor. Works a treat!
Posted by Unknown at 18:56 No comments:

I finally dug up the last of the Sarpo potatoes. The Miras were up first and they were very badly damaged by slugs. I reckon at least half of them were affected. So I wasn't too hopeful for the Axonas despite the few I had dug the previous week being damage free. But good news, only a few were eaten and even that was mild damage. The two varieties were grown next to each other so I think this is a good comparison and I shall be keeping some of the Axonas back for next year. It's not recommended as disease may be carried over, but these spuds are blight resistant so they should be OK, and I got blight on the tomatoes this year but not the spuds.

I made an order of seeds and potatoes from Thompson & Morgan. The bill came to around £40 which is a lot less than last year as I hope to use some of this year's unused seed.

I planted out some shallots alongside the onions. The shallots were selected from bulbs of this year's harvest, so no cost again. I did the same trick for garlic (Solent Wight); the cloves are a bit small but I planted them in the bottom bed where I dug in a lot of compost to help them fatten up.

The greenhouse was cleared of the tomato plants. There are still a few sweet peppers left, none of them has turned red though. The chilli plants don't look like they will survive the winter but I'm not too bothered as I'll just grow some more next year.

I sowed broad beans (Aquadulce), freshly arrived from T&M, in 3" pots and they will overwinter in the greenhouse. Likewise, I sowed some spinach and spring onion in large pots. The spinach has germinated quickly but there is no sign of the onions. I used a new packet of seeds to exclude the possibility that my past failures with spring onions was due to old seed. The nice weather recently has heated the greenhouse up nicely and should be good for germination, if this doesn't work I don't know what will.

I transplanted some lettuce (Little Gem) which I has sown a few weeks back, into the side bed and covered them with plastic cloches. It's a bit of a gamble but I may get some young leaves for a winter salad.

I pulled up all but one of the courgette plants which is still flowering and I even cut a courgette last weekend. It's been a good yield this year as was last year.

The chillis I strung up have nearly all turned red; I hadn't expected that.

The flowering stems of the blackberry plants were cut down and this year's growth tied in.

The butternut squash plants are dying back revealing some small fruit, I don't know if they will taste any good.

Finally, the leaves are starting to fall and I will be collecting them for leaf mould. I plan to make a cage out of chicken wire to put them in rather than the black bin bags I have used before.

A dull weekend with a lot of rain, the river flooded again. So not much work could be done outside. I had planned to dig up the last of the Sarpo potatoes but they would not have dried out. I did dig up one plant of the Sarpo Axona to find a good batch of red tubers with no slug damage. The skins are quite tough and I tried some tonight. As I suspected they are quite floury but will be good for roasting. 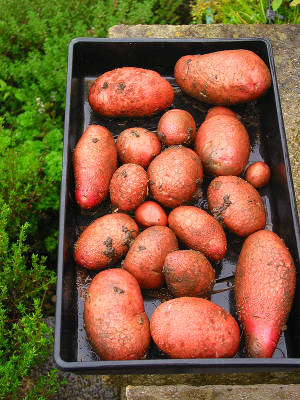 Speaking of eating, I picked one of the green peppers. Their skins look like they have been polished. 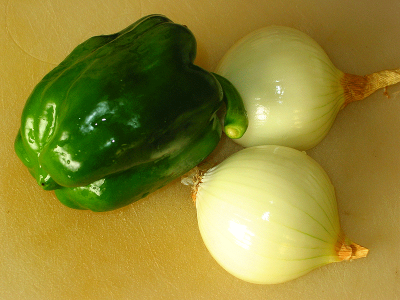 I rearranged the herb bed. I have too many thyme and sage plants and could use the space I free up for other veg such as more strawberries and carrots. I think the carrots will grow well because the soil has a very good structure due to the bed being well cultivated for flowers beforehand. 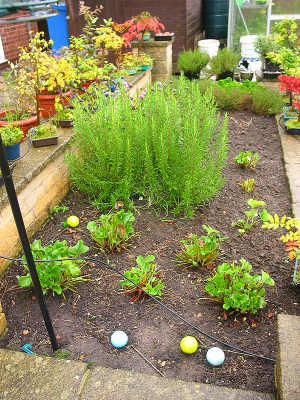 I will remove one of the rosemary bushes too. I transplanted some strawberries from the planter; it hadn't been very successful, I think the soil dries out too quick. I may put in a thyme plant in the planter as they will tolerate drier conditions.

I cut down the asparagus ferns and then mulched it with a good layer of compost (boring photo below). I'm hoping for more ferns next year of course. That's the joy of gardening, next season is always anticipated as you never know what it may bring. 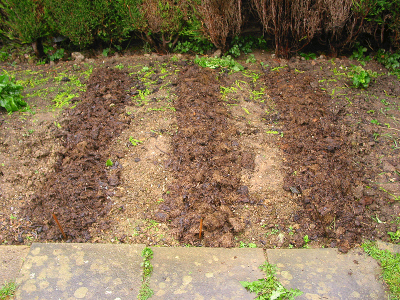 I'm going to take regular photos of the 3 beds to follow the seasons; they can change so dramatically.

Side bed showing leeks and empty ground where the spuds were with the Sarpos behind that. In the immediate foreground are some pathetic carrots, that's why I want to try carrots in the herb bed. 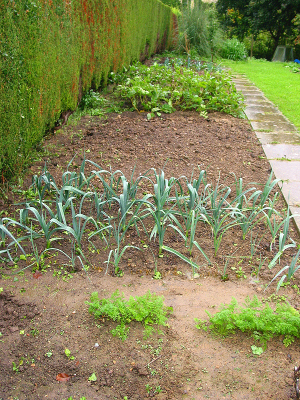 Beyond the Sarpos are the overwintering onion sets and then some more leeks and a few remaining beetroot with the asparagus bed beyond that. 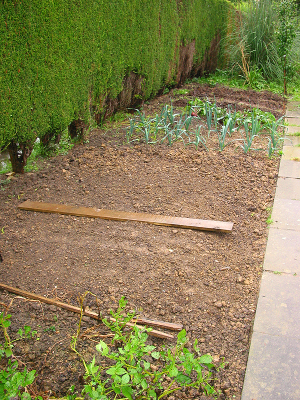 Looking back up the bed to the greenhouse with the grapevine against the fence, no grapes though but it is only its second year. 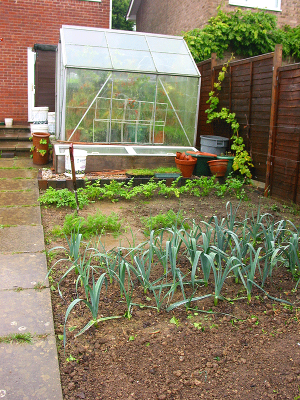 The bottom bed is mostly empty after I dug up the sweetcorn. In the foreground are the parsnips which have got some good root on them. I need to grow more next year. At the back are some rubbish squash plants, I suspect they haven't grown as they are in the shade of the apple tree for much of the day. 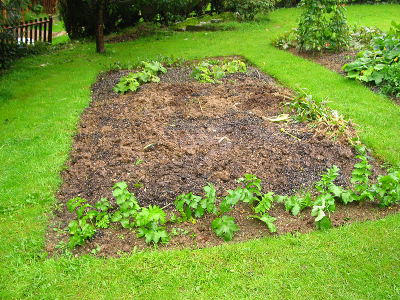 The middle bed also has two squash plants then the flat leafed parsley and pumpkin. Behind all that is the runner bean wigwam which is still producing. 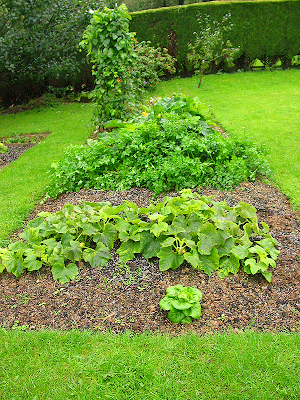 Finally, the Japanese maple bonsai has turned a most magnificent red. 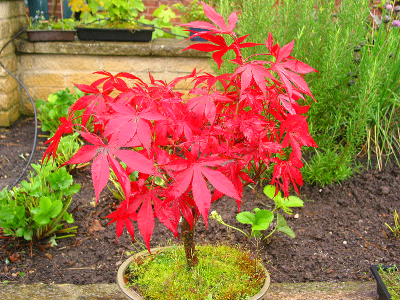